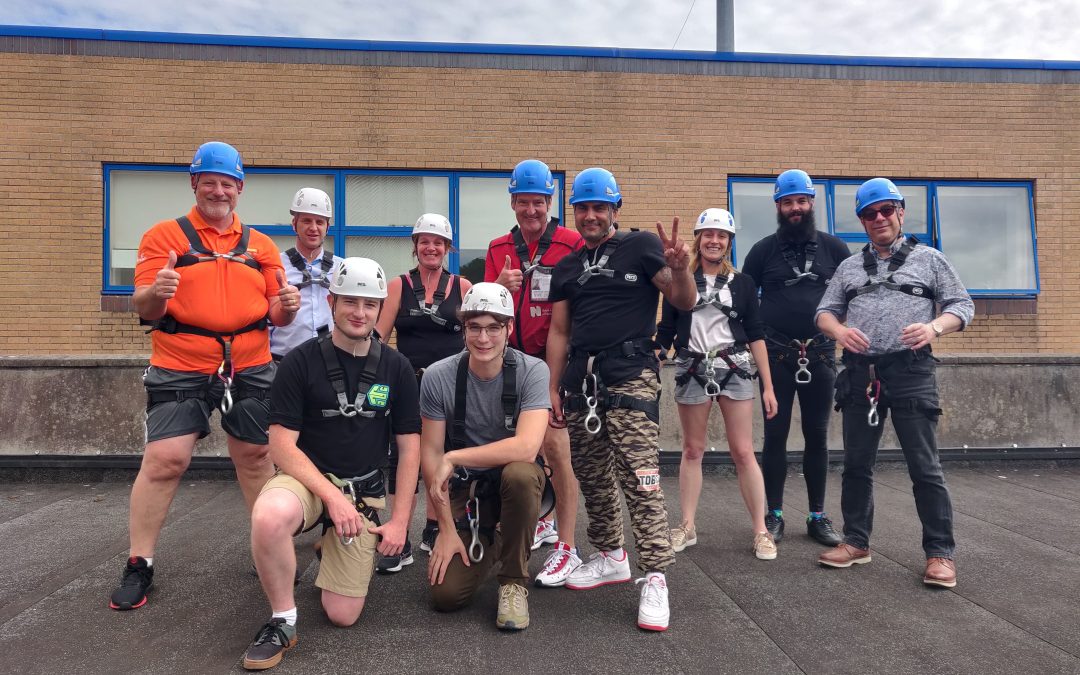 More than 50 students, staff and invited guests took on a daring challenge at City College Plymouth on Wednesday to raise thousands of pounds for two local charities.

Having chosen Plymouth Hospitals Charity and Friends and Families as their nominated charities for the year, students and staff at City College set out to do something different in the hope of raising as much money as possible for the causes and decided to organise an abseil down the side of the tower block which stands at 114 feet tall.

The charity abseil, supported by Devon Adventure, was the highlight of a special charity day that included inflatables, musical entertainment from both student bands and a DJ, and a barbecue all set up under the June sunshine.

The College’s Student Experience Manager, Chaz Talbot, said: “Throughout the year we hold special events that allow our students to try something new or to challenge themselves, and many of our students expressed interest in a final fundraising push for our two nominated charities.

“Abseils down the side of the College have taken place in the past but not for many years. Knowing we wanted to make this a day to remember we decided that an abseil would form the central part of a big charity day that everyone could get involved with, even if they didn’t choose to abseil themselves.”

Students and staff from all departments volunteered to complete the abseil with all monies raised going to the two charities. Among those making their descent was College governor and Street Factory founder, Toby Gorniak, MBE, and Big Issue seller Clive Rowe, who has become a much-loved member of the City College community. Clive won the admiration of people around the world last summer after achieving his dream of gaining GCSEs in English and maths, which meant he could progress to study a level 3 course at the College.

Toby said: “I had such a great time being part of this brilliant event that is ultimately helping the community. Huge respect to City College. The support shown by students and staff has been immense and there’s been such a great atmosphere on campus.”

Clive added: “I came back to College as an adult learner and I’ve never felt so included. My confidence is sky high and today I took on an abseil – something I have never done before, partly due to being terrified of heights. I have loved being able to raise this money for two brilliant charities.”

Jamie Lee, Charity Engagement Co-ordinator at Plymouth Hospitals Charity, said: “What a fantastic day! There was a great atmosphere on campus for this event, and the charity is really grateful for the effort they have put into fundraising.

“We’re pleased that the students of City College Plymouth have been able to do something that we hope they will remember forever whilst also doing something that will help many local people.”

Jan Burns, Fundraising and Partnerships Lead for Friends and Families, said: “A huge thank you to City College Plymouth organising such a great event today.  It was nice to see so many people partaking in or supporting the abseil.

“It was a great experience and the group I abseiled with had a fantastic time. The two nominated charities (Friends and Families and Plymouth Hospitals Charity) are both wonderful charities and are interlinked by the children and families we support. Friends and Families empowers families with disabled children. We are extremely grateful to the staff and students of City College Plymouth for raising such an incredible amount of money. Thank you.”

By the end of the day, the College had raised more than £3,600 through online funds. If you would like to help boost the fundraising total, you can donate via https://plymouthhospitals.enthuse.com/cf/city-college-plymouth.

Chaz added: “The College would like to say a huge thank you to Absolute Bubble Football for supplying the inflatables. We also need to thank our hospitality department for the delicious barbecue, the tremendous Street Factory for keeping our abseilers going with their tunes, and our music and production arts students. Finally, we would like to thank everyone who has been a part of this fantastic College-wide event in some way.”

Student enrichment is a big part of life at City College, with students encouraged to get involved with community and fundraising activities such as the charity abseil, allowing them to build confidence that they will carry with them into their future careers.

To find out about studying City College Plymouth, visit cityplym.ac.uk.