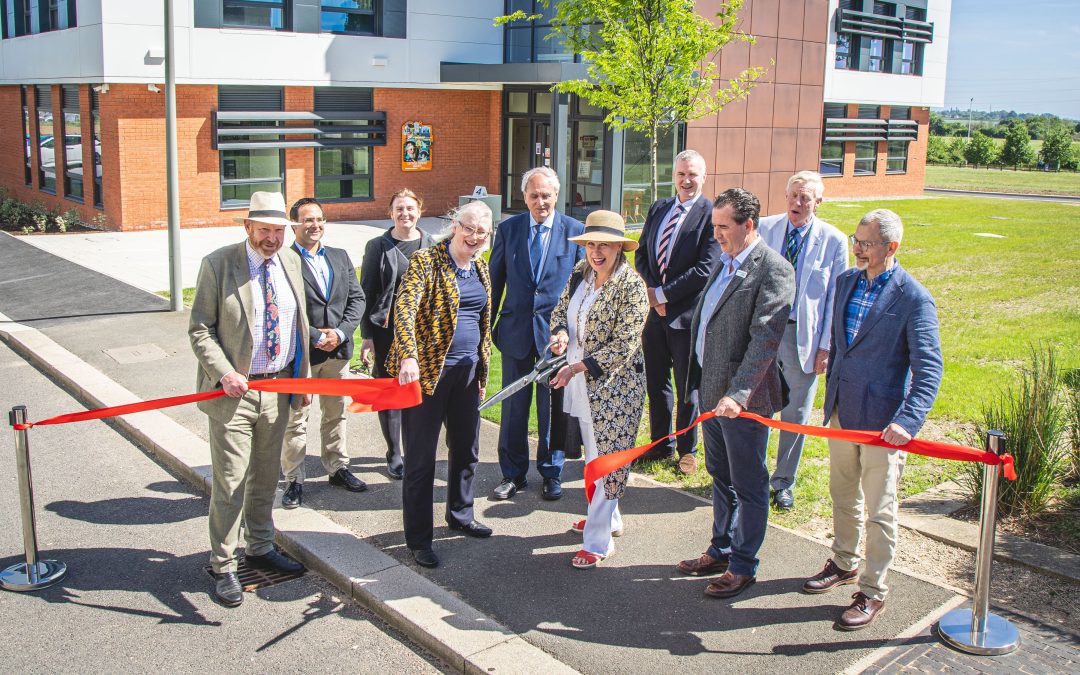 Exeter Science Park has marked the official opening of its £5 million George Parker Bidder building, built to net zero carbon standards and supporting over 100 jobs, with a ceremonial tree planting.

Tenants of the new building include Remit Zero, Securious, Edson Tiger, Rx-info, Quanterra Systems, Concept First and Dashboard, companies that have all moved from the Science Park Centre to embark on the next stage of their company growth.

Dr Sally Basker, CEO of Exeter Science Park, said: “Exeter Science Park’s mission is to help innovative STEMM companies to deliver extraordinary growth and offer space for each stage of the business lifecycle, which is being realised here as we’ve seen many tenants grow and move across the road from the Science Park Centre.”

Former chairman of the Forestry Commission, Sir Harry Studholme, and Lady Lucy Studholme, former High Sheriff of Devon, joined Dr Sally Basker for the planting of a Japanese Green Vase tree to celebrate the Queen’s Platinum Jubilee and the official opening of the space.

Chosen for its capacity to store carbon, the tree, also known by its Latin name Zelkova serrata, has an ‘A’ rating in carbon efficiency, further contributing to the Park’s net zero aspirations.

“Not only will this help offset some of the carbon generated during construction, but sitting at the gateway to the Park, helps to provide a vibrant and welcoming place to work or visit.”

Exeter Science Park tenant Treeconomics was commissioned to provide the tree. Company Director Kenton Rogers explained: “Over its anticipated ideal lifespan, the Japanese Green Vase tree will sequester approximately 5,341kg of carbon. This gives the tree an ‘A’ rating in carbon efficiency, which can be seen on its dedicated carbon efficiency tag, provided along with the tree.

“This tag is much like the energy efficiency ratings tags shown on domestic appliances and indicates the efficiency of the tree based on the amount of carbon it will absorb from the atmosphere and store within its woody tissues over its anticipated ‘ideal’ lifespan.”

Bidder, born in Moretonhampstead on the edge of Dartmoor in 1806, is a former President of the Institution of Civil Engineers. Best known for his work on the development of the railway system in the 1800’s, he joins STEMM icons Sir Isaac Newton, Alan Turing, Ada Lovelace, and Hedy Lamarr to lend their names to the centres of excellence at the Park.

Funding for the build was secured in August 2020 from the Government’s ‘Getting Building Fund’ and allocated to Exeter Science Park by the Heart of the South West Local Enterprise Partnership (HotSW LEP) from its £35.4 million share of the national pot. The building was one of the first Getting Building Fund projects to begin construction in the area.

Karl Tucker, Chair of the Heart of the South West LEP, said: “The opening of the George Parker Bidder building is an important milestone in Exeter’s post-pandemic recovery, and it is fantastic to see a number of STEMM businesses already thriving in the new space. We are delighted to have funded the project with £5m of the Government’s Getting Building Fund, as part of our aim to deliver new jobs and fuel the local economy.”

Minister for Levelling Up, Neil O’Brien MP said: “This state of the art net zero science centre has been backed by government funding, and will support businesses and create jobs. I’m excited to see the innovative businesses that the centre will be home to thrive and help Exeter prosper.

“We are levelling up communities up and down the country and will continue to invest in ambitious local projects like Exeter Science Park, delivering on our commitments as set out in the Levelling up White Paper, while also working towards our Net Zero targets.”

Exeter Science Park Limited is the Park developer and has four shareholders: Devon County Council, the University of Exeter, East Devon District Council and Exeter City Council. Its two strategic partners are the Heart of the South West Local Enterprise Partnership and the Exeter and East Devon Enterprise Zone.