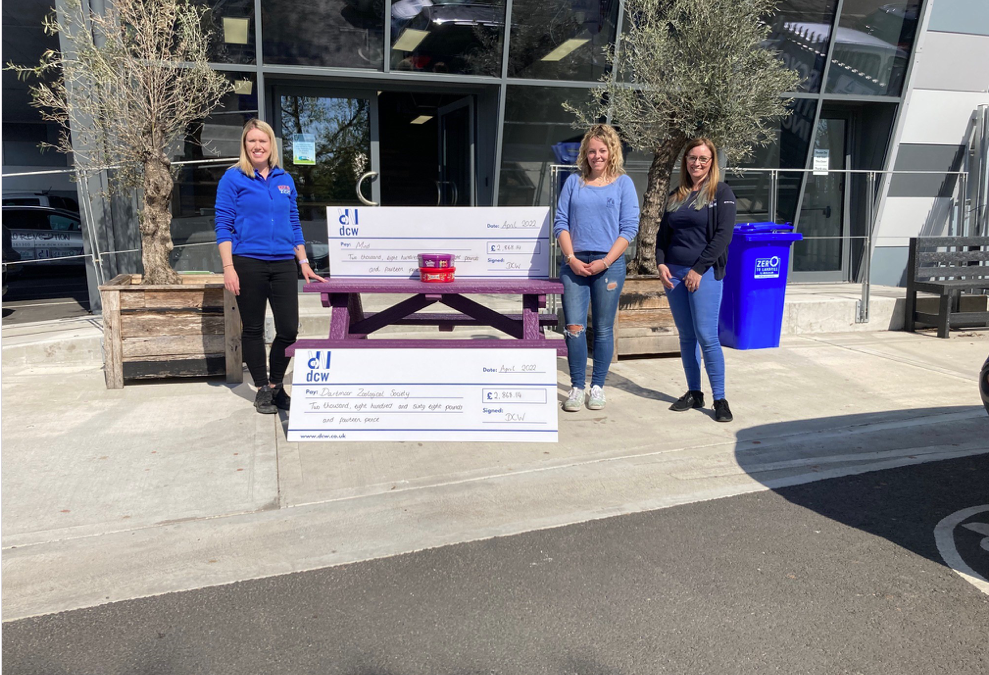 DCW Polymers, the South West’s only specialist plastics recycling and reprocessing plant, has raised £5,736.28 for local charities by recycling plastic tubs and bottle tops donated by the general public.

The funds, which have been split equally between Dartmoor Zoological Park and mental health charity Mind, were raised through DCW Polymers’ Recycle & Raise initiative. The appeal asked the general public to donate plastic tubs and bottle tops for recycling which DCW Polymers has shredded into granules.

The granules have been used in manufacturing DCW’s recycled plastic furniture range which has raised approximately 8p per tub recycled for Dartmoor Zoo and Mind.

Over 85 businesses, schools and organisations across the South West volunteered as collection points for the tubs, bottle tops and takeaway containers, with the general public donating 1,925kg of tubs and 673kg of bottle tops in a bid to support the charities. The weight of the tubs equates to 64,166 tubs recycled through this year’s Recycle and Raise campaign.

Hosted by DCW Polymers annually since 2019, the Recycle & Raise appeal has raised over £11,000 for charitable causes.

DCW Managing Director, Simon Almond, said: “The enthusiasm from the public to help us raise as much money as we can for these charities this year has been incredible. So much so that we have experienced our most successful fundraising year yet, raising over £5,500 for Dartmoor Zoo and Mind.

“These are two charities that I am personally very passionate about. As a trustee of Dartmoor Zoo, I’m invested in the incredible conservation work the team do, and Mind is a charity that we were keen to support in light of the toll the pandemic has had on mental health and wellbeing.

“I’d like to thank everyone who has donated to the scheme as without you, we couldn’t have raised these vital funds for charity. Since 2019, we’ve smashed each of our targets every year and as the initiative grows, we hope to raise even more funds during next year’s campaign which will kick-off in October 2022.”

Thanks to the enthusiasm of the public and the success of the appeal, DCW Polymers is now collecting plastic tubs and bottle tops all year round. The funds raised from this will also go towards the annual Recycle & Raise scheme, giving DCW and the general public the opportunity to support local charities either side of Recycle & Raise season.

For those who cannot easily access the permanent drop-off points, the Recycle & Raise seasonal appeal for plastic tubs and bottle tops will return in November 2022 and will run until February 2023. DCW encourages businesses from across Devon and Cornwall to sign-up, creating plenty of accessible drop-off points across the region. If your business would like to sign up as a drop off point to help raise funds for DCW’s chosen charities, please email emily@dcw.co.uk.