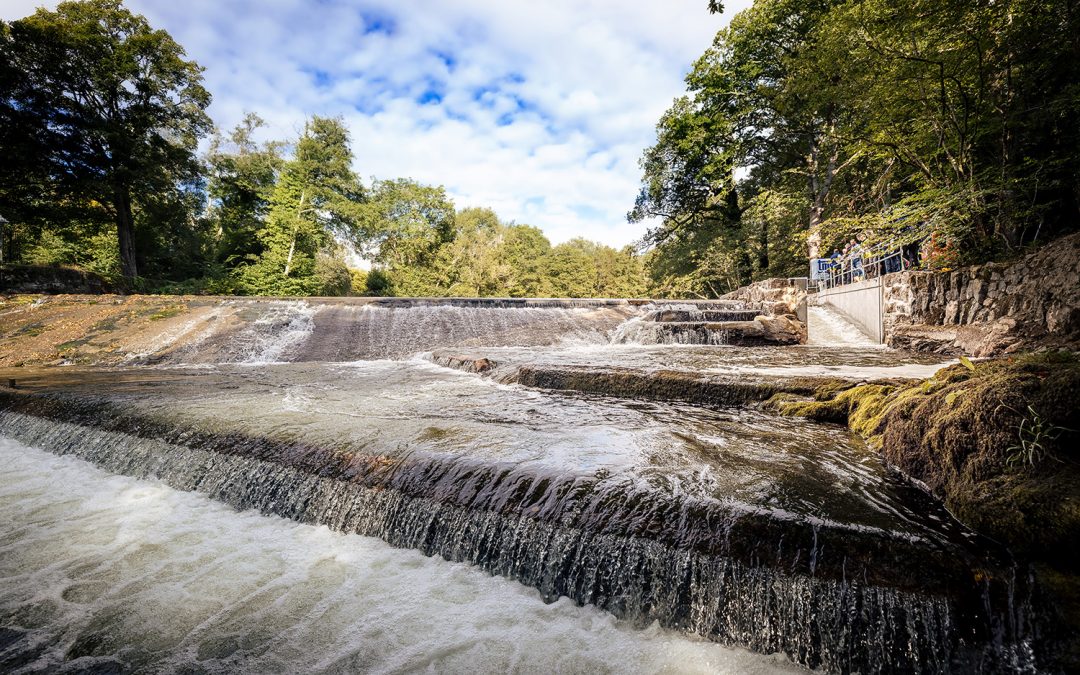 A brand new, state-of-the art fish pass, which addresses one of the last remaining barriers impacting the River Dart’s ailing salmon population, has been opened today at Buckfast Abbey, Devon, in readiness for the start of the autumn salmon migration.

Funded by Buckfast Abbey and supported by a partnership grant of just under £100,000 from the Environment Agency, the new Larinier fish pass replaces the historic Victorian pool pass at the Abbey, which was damaged in periods of high water flows last year, resulting in a significant scour hole.

The new Larinier fish pass was commissioned by the Abbey and opened in an official ceremony and blessing by Abbot David Charlesworth.

With its headwaters designated as a Special Area of Conservation, the River Dart has a salmon population that is currently deemed to be ‘At Risk’. Data from the Environment Agency (recorded through rod/angling catches) showed a decrease in salmon rod catch on the River Dart in recent years, falling from an average of 330 fish in the late 1980s to just 14 in 2019. In 1986 over 2,500 salmon were caught on the River Dart. This included net catches, which are not currently permitted on the river.

The new Larinier fish pass will help turn the tide on the River Dart’s diminishing salmon numbers by aiding passage to their natal spawning grounds.

Aaron Bray, Estate Manager at Buckfast Abbey, first spotted the damage: “The River Dart has a reputation for rising rapidly. It can rise and fall in just two hours, and that can lead to significant damage. We regularly check the fish pass, and on this occasion it quickly became apparent that there was an issue.”

An assessment of the pass showed that it was at risk of potential failure. It also revealed a possible breach in the weir crest.

As a result, Buckfast Abbey took immediate action, which included the installation of a temporary baulk fish pass to aid the passage of salmon and sea trout migrating up the River Dart to their natal spawning grounds.

At the start of the construction, which required a section of the river to be dewatered, Westcountry Rivers Trust safely relocated species discovered in the three pools below the weir, moving them to locations further upstream. This included eels, lamprey, minnows and sea trout.

The new Larinier fish pass design provides an optimal route for fish passage over a wide range of flows through the use of special metal baffles set into the bottom of the pass. These reduce water velocities to a suitable speed for salmon and sea trout.

Working to a tight deadline the fish pass construction, as well as remedial work on the weir, was completed ahead of the start of the autumn salmon migration run by local contractors, Teignmouth Maritime Services Ltd. An upgrade to the existing eel pass on the opposite bank of the river was also completed, allowing easier access for eels to their upstream habitats.

Commenting on the works Brecht Morris, Environment Agency Fisheries Specialist, who oversaw the new fish pass’ installation, commented: “As an environmentally conscious and responsible landowner, Buckfast Abbey chose to do their upmost to help fish populations on the Dart, following the failure of the old fish pass. The new Larinier pass provides an optimal solution for fish passage and will allow salmon and sea trout to migrate upstream to access suitable spawning grounds.”

He added: “Working in partnership, we have successfully addressed one of the largest remaining barriers on the main River Dart. This will significantly improve the access into the upper catchment for salmon and sea trout so that they can complete their lifecycle.”

Olivia Creswell, Aquatic Services Team Leader at the Westcountry Rivers Trust, whose team helped move fish found in the pools below the weir upstream, said: “We have a long history of fisheries conservation on the River Dart, working with landowners and angling groups to improve the Dart catchment for our struggling salmonid population.

“Buckfast Abbey’s new fish and eel passes have a vital part to play in allowing salmon, trout and eels to more easily migrate through the River Dart. This will undoubtedly help to improve prospects for salmon and sea trout numbers in the river.”

Abbot David, Buckfast Abbey, commented: “The Monastic Community at the Abbey has always had a very close connection to the environment, whether it be through our work to promote the better understanding of bees by our Bee Department, or through the planting of 100,000 trees on our farmland over the past 20 years.

“The Benedictine ethos is one of care for mankind and the environment, and that extends to the local ecology, flora and fauna. We view ourselves as custodians of the land on which we sit and the River Dart which runs through the Abbey’s grounds.

“The installation of a better way to help salmon, sea trout and eel pass upriver, is entirely in keeping with our Community’s commitment to caring for the environment. Our hope is that this will aid the recovery of the salmon population on the River Dart for future generations to enjoy.”

Aaron Bray, Estate Manager at Buckfast Abbey, added: “The project has been a model example of a working partnership.

“Having granted the Abbey a licence to undertake the work over a necessarily short window of opportunity, the Environment Agency oversaw the works, while the Westcountry Rivers Trust relocated species found in the pools below the weir.”

He added: “The construction team at Teignmouth Maritime Services worked tirelessly and resourcefully throughout, despite the many challenges they faced. That included additional work to improve the integrity of the river banks in the vicinity of the weir.

“Thanks to their resilience, determination and commitment to get the job done, all construction activity and testing was completed on schedule, enabling the new Larinier fish pass to come into commission ahead of the works licence deadline on 30th September.”