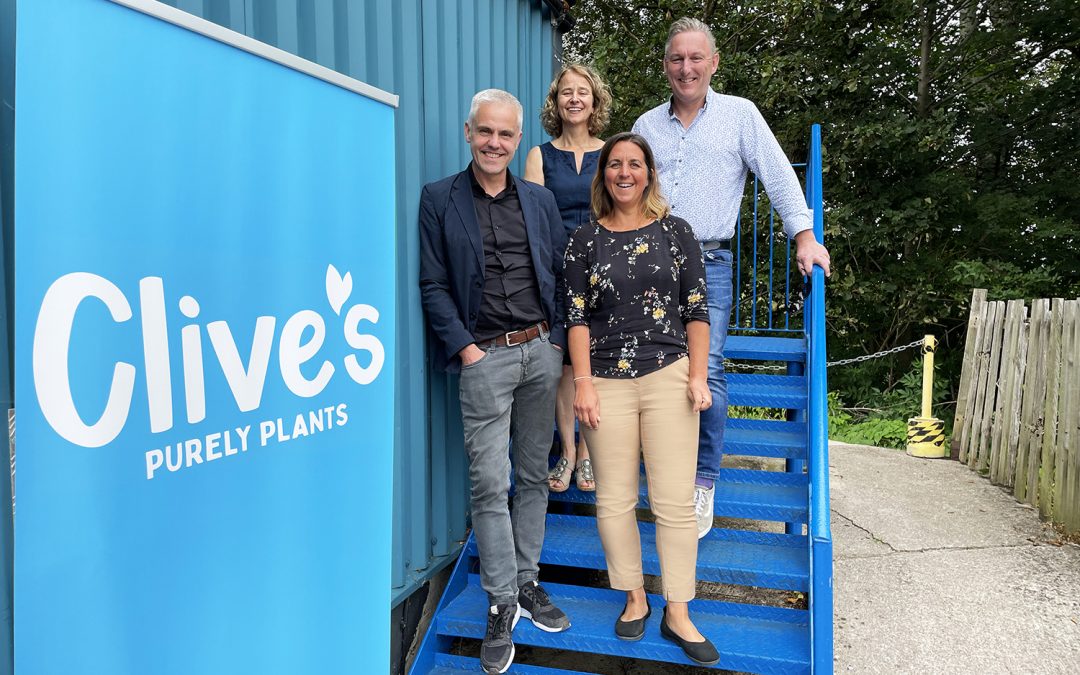 Clive’s Purely Plants (Clive’s), a vegan bakery based in Dartmouth, has secured a game-changing investment from high-profile investment fund Veg Capital. Veg Capital provides funding to companies striving to replace animals in the food system, and their backing marks a historic moment in the bakery’s 35-year history.

Matthew Glover, Managing Director of Veg Capital and Co-Founder of Veganuary said, “This is such an exciting investment for us. Clive’s offers the best of both worlds – over 30 years of invaluable experience, with all the ambition, scope for growth and enthusiasm of a start-up. This partnership has huge potential to further our mission of replacing animals in the food system, and we’re thrilled to be working together.”

Clive’s was founded in 1986 by Devonshire foodie Clive Lowe, who began selling the bakery’s signature ‘Creamy Mushroom Pie’ from the back of his bicycle. Veg Capital buy out existing majority shareholders Sally and Chris Carson who have nurtured and grown the business steadily over the past 17 years.

Sally Carson said, “We want to express our most heartfelt thanks to all the amazing suppliers and customers we’ve worked with over the years. Clive’s wouldn’t be where it is today without them, and we’re delighted that they’ll continue to grow with Clive’s as it starts this exciting new chapter. Our success really is a testament to our hardworking and passionate team, as well as the strength, and prosperity of the outstanding food and drink industry here in the South West.”

Today, Clive’s driving force is Managing Director Esther Pearson, who continues to maintain a share in the business, whilst Veg Capital, who operate as a non-profit, donating all profits to animal charities, hold a majority share. Under her management, Clive’s will continue to expand its diverse range of pies, savoury tarts, quiches and nut roasts and work towards increasing production by 400% to reach £10m sales.

Esther Pearson, Managing Director of Clive’s said, “We’re over the moon to have the backing of Veg Capital. It marks a new era for Clive’s, one where we can continue to expand, innovate, and help shape the future of plant-based eating. We’ll always stay true to who we are, focusing on food that tastes good, and does good.”

In 2020 Clive’s relocated to a new purpose-built site in Dartmouth, four times the size of its previous home in Buckfastleigh, bringing almost 50 new jobs to the area. This move was vital to enable the business to grow and service the growing demand for Clive’s products. Clive’s currently sells to major supermarkets such as Waitrose and Morrisons, food delivery services like Abel & Cole and Ocado as well as numerous independent health food shops up and down the country. They also export to the US, Australia, and Dubai.

With the continuing rise of consumers choosing to eat vegan food, Clive’s is constantly innovating to create new, tasty options that push the boundaries of plant-based eating.  Earlier this year, the pioneering team at Clive’s launched the UK’s first ever vegan Quiche Lorraine. Whilst this week, it launches its first ever Puff pastry pies, a ‘Beefy Ale Puff Pie’ and ‘Chickeny Puff Pie’, which both feature herby seitan as a meat replacement. The investment from Veg Capital will enable Clive’s to drive forward their pipeline for new product development.