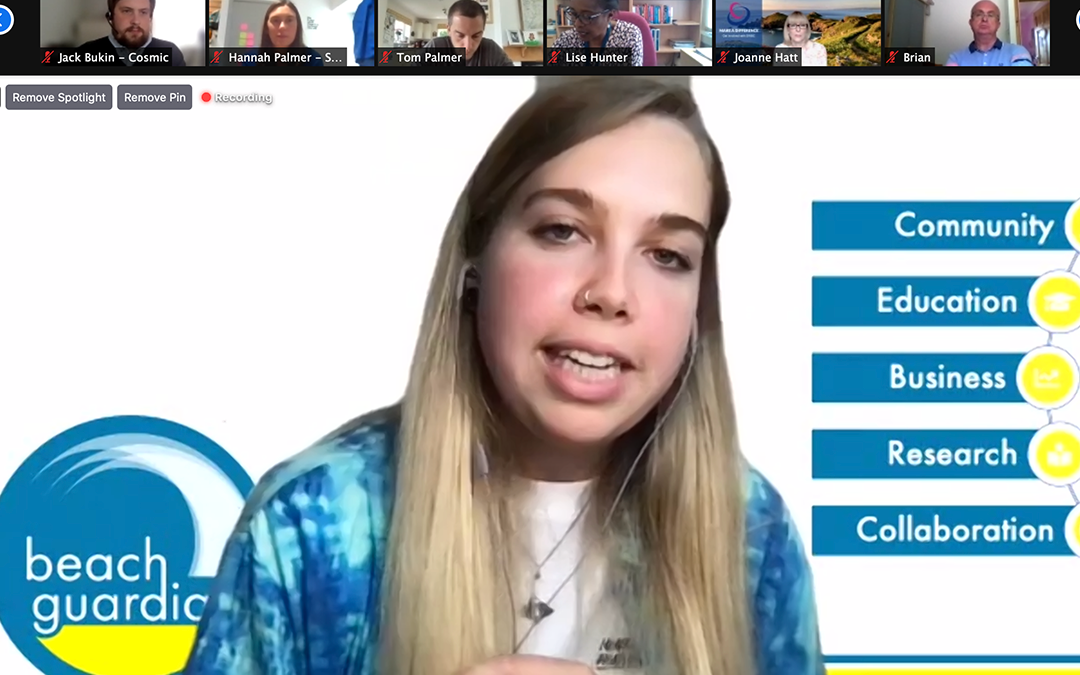 Friday’s South West Business Council Conference was delivered through a collaboration with the British Youth Council to ensure that we heard the youth voice on two specific policy items, Transforming Education and Protecting the Environment.

For our Spotlight on the South West session, we were delighted to be joined by Sarah Jellard from Wave Rangers, part of the national Wave Project in partnership with the South West Coast Path whose pre-recorded interview informed the group about the work she is doing with vulnerable young people aged between 10 and 20. Wave Rangers work with young people from a variety of backgrounds, providing them with the opportunity to learn about the environment through collaborative projects along the coast path, building their confidence as well as many other skills. This volunteering culminates with the opportunity to achieve a John Muir award after 25 hours of volunteering. Find out more: Wave Project WS on Vimeo.

We then moved into Session One on Transforming Education, starting with the inspirational presentation from Jack Bukin, Director with Honiton-based Cosmic, sharing how he joined them as an apprentice a little over five years ago having realised that university wasn’t for him and whose progression in the business has resulted in his joining the Board in February this year whilst still in his mid-twenties. The insights he shared included making sure to take each and every opportunity and not to be afraid to step up and try new things.

Maisie, Member of the Youth Parliament for North Devon, followed Jack with another great presentation, talking about her campaign for changes to the curriculum to deliver for the wide range of learning styles and learning abilities that the current education system isn’t built for. Her description of how much the world of transport has changed since Ford invented the first automobile and how little the world of education has changed by comparison during that same time period had resonance with many of the audience. Many in the conference agreed that this last year of changes has really shone the spotlight on the effectiveness of judging five years of education through a few hours of examinations, if that.

To close the education session, we heard from Abi and Pierre from the Bank of England Youth Forum, whose research into what our young people want highlighted how ill-informed they feel as they move out of education. Over 95% of those surveyed said that they wanted to be better informed about matters like savings, loans, mortgages and the tax system.

The discussion groups saw smaller groups able to reflect on the three speakers, and there was a real appetite to be involved in supporting the changes in education that employers have been asking for many years, so the question is how to support some of these existing campaigns and ensure that our future workforce and leaders are better equipped.

Session Two on Protecting the Environment began with an excellent presentation from Emily Stevenson of Beach Guardian, talking about how she has been collecting rubbish from our beaches for more than half her life, and how this grew into the community interest company it is today, which delivers in five main areas, for the Community, in Education, for Business, doing Research, and through Collaboration with a wide range of organisations. Emily has been working on a youth engagement activity for the G7 which surveyed 3,000 young people across the UK to find out that more than a third were uninformed about climate change, further supporting the need for their Beach Guardian School Sessions.

Emily closed by affirming that her three asks that she is pushing the world leaders at the G7 to engage with are :

She closed by reminding the group that there is very good reason for including young people in decision making conversations:

Yet less than 3% of world leaders are under 30

Our second speaker was Alex, Member of the Youth Parliament for Gloucester/ Forest whose background in film-making, writing and public speaking has been put to good use during his time in office, focusing on highlighting the challenges that the world faces with the only care for waste being economically driven. Reminding us all that the Climate Action conversation is not a new one, having been politically active in the UK since the 1980s, and with the first Toyota Prius coming to market in 1997, Alex reminded us that consumers and businesses are the two key polluters.

The Youth Parliament’s Make Your Mark campaign which launched in 2020, highlighted that teenagers wanted to see more done to protect the future of planet earth. Collaborating with Friends of the Earth this campaign carries a consistent message which is: prevent at source.

They have been heavily involved in the Plastic Pollution bill, looking to ban the use of all non-essential single use plastics. Alex is very active in his area, lobbying with his local MPs to reshape energy production and use in the area, to deliver a number of reforestation projects as well as developing compost farms.

Josh from Teach the Future, a campaign for to put sustainability and climate change on the curriculum, closed this session on Protecting the Environment by sharing information from their research about how well informed young people feel in terms of the science behind the changes taking place across the world. You find out more about and support their work Teach the Future: Campaign for climate education.

As he closed, he shared one specific statistic that had great resonance with all the employers present. Students are looking to work for a company that has good environmental credentials. Specifically, a survey found that students were willing to work for jobs that may pay up to £6k less than an equivalent provided that the company has good environmental credentials. This clearly highlights that those entering the workforce are looking for a values match and this insight should be a driver for changing the way we run our businesses so as to continue to attract the right talent.

In drawing the Conference to a close, Paul Coles of SWBC said:

“We have just had a very stimulating, thought-provoking and challenging conference and I thank all the contributors today. It seems to me the region that puts mental health; protecting the environment and transforming the education system at the forefront of their thinking will be the one that is the most successful over the coming years. I strongly believe the South-West can take a leadership position here and the South West Business Council looks forward to playing its part to make some of these ambitions a reality.”

As we plan our future conferences we will return to these themes and make sure that we embed diversity of thought and voice.

Other useful links shared during the Conference: