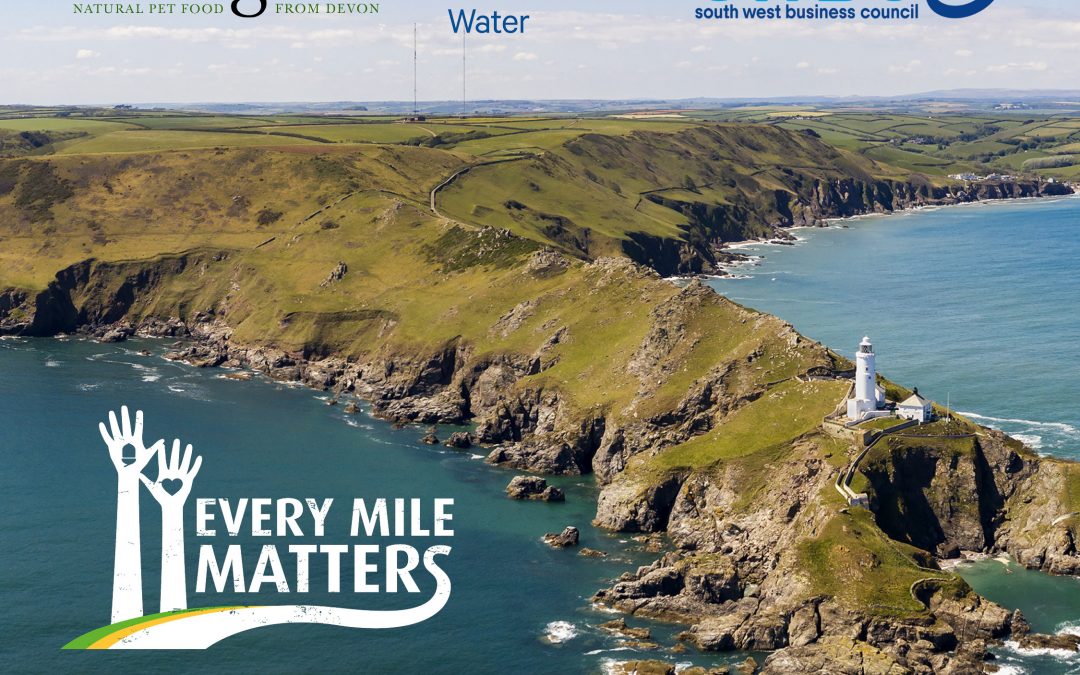 Following recent reports about increased ‘wear and tear’ due to severe storm damage, increased footfall and coastal erosion, the charity that looks after the Coast Path has announced it has raised over £100,000 to help safeguard the future of the National Trail.

The South West Coast Path Association (SWCPA), which has been collecting money as part of the Every Mile Matters campaign for just under a year, hit the milestone total earlier this week. Since its launch, donations have been coming in from individuals, fundraisers, local businesses and grant givers. The campaign aims to change perspectives about the true value of the Coast Path to people’s health and wellbeing, the environment, and the regional economy.

“The last year has been a challenging time for everyone and our focus has been making sure the Coast Path is open for people to reconnect with nature and meet with friends and family safely. It’s amazing and very humbling to see what a difference people are making with their generous support, giving us the resources to get work done on the ground for this world class Trail on our doorstep.”

The SWCPA has been championing the Coast Path since 1973, promoting it as not only a footpath, but as a cause worth defending. Now the charity has the support of over 10,000 members who give back regularly to trail, and the support of over 75 volunteers working across the region. Every year the South West Coast Path generates health benefits for the nation valued at over £75 million. It supports the wellbeing of over 9 million people who visit each year, connects hundreds of coastal communities, helps the region’s economy thrive and hosts internationally important ecosystems.

Announcing this major milestone was the job of charity ambassador and award-winning author of The Salt Path, Raynor Winn. Raynor, who credits the Path with changing her life said, “I am absolutely over the moon that the Every Mile Matters campaign has reached this first important milestone in its fight to secure the future of the SWCP National Trail, reaching an amazing £100,000 raised! A huge, heartfelt thank you from me and all lovers of this special place to the generous donors, fundraisers, grant-givers and especially the campaign sponsors, who have come together to make this happen, you are making such a difference to the communities and biodiversity of this unique natural corridor.”

Having launched Every Mile Matters around the time of the first lockdown, the charity has seen the campaign gain continued resonance throughout the year as people spent more time appreciating the role green and blue spaces play in supporting our wellbeing.

“The pandemic has transformed the nation’s attitude towards getting active outdoors and this seems to be gradually translating into a deeper understanding of the need to care for, and crucially, fund, the wild places we have all come to depend upon over the last year. It is encouraging that a considerable number of those who have donated to Every Mile Matters are first-time supporters of the Association, including an anonymous ‘Mile Maker’ donor from South Devon who took the fundraiser to its £100,000 target with his generous gift of £1,400 – the amount it costs to care for a mile of the Trail for one year.”

“We’re delighted that South West Coast Path Association has hit its fundraising target for the first year of Every Mile Matters. We’ve supported the charity for many years and lent our support to this campaign to help secure the path’s long-term future in the face of the rising threat from climate change. The past year has illustrated just how valuable the path is – offering stunning views of some of Europe’s cleanest beaches and coastal waters, as well as access to many of those beaches and waterways – which have been more important than ever for our health and wellbeing, both mental and physical.”

“This has been a year like probably no other, when walking with our canine companions has proven more valuable than maybe ever before during the lockdown periods and social distancing restrictions. We are so lucky to have the South West Coast Path on our doorstep and as an organisation Forthglade are so pleased to be able to financially support the maintenance of such a beautiful area, that we can all enjoy”.

“As a very regular walker of the Trail, I am thrilled that the South West Coast Path team have reached this milestone. I have no doubt in my mind the huge benefits the Coast Path brings both financially, and from a wellbeing perspective. The work of the SWCP team makes us very proud to have them as our designated charity”.

Money raised by the campaign throughout the last year has helped to fund ongoing work caring for the Trail as well as health and wellbeing projects prioritised by the charity during the pandemic. These have included a project with Devon and Cornwall Refugee Support to lead orientation Coast Path walks for new settlers to the Plymouth area, a programme of beginner walks for inactive and socially isolated older people across Devon in partnership with Active Devon and work with Devon Disabled Ramblers and Cornwall Rolling Ramblers to improve easy access walk descriptions for the National Trail.

The charity is now preparing for year two of the campaign which will see a shift in focus from health and wellbeing to environment. You can continue to support and donate to Every Mile Matters by visiting the charity’s website at www.southwestcoastpath.org.uk/everymilematters