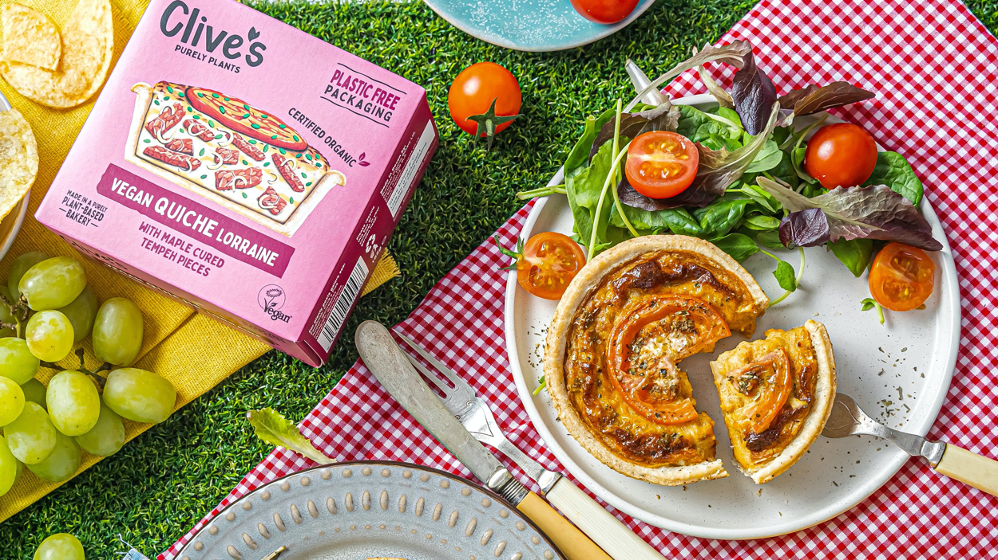 “Clive’s have been at the forefront of plant-based innovation for 30 years and we are delighted to be leading the way once again with these vegan quiche”, says Esther Pearson, Managing Director at Clive’s Pies. “Our clever Clive’s team have perfected the recipes and we are very proud of the results”.

“We are always looking for new and exciting dishes to add to our vegan range and we’re delighted to be the first supermarket to launch these delicious plant-based products from Clive’s. The two new quiches complement our existing vegan selection perfectly, offering our customers a new plant-based option that we’re sure they’ll love.”

Clive’s Purely Plants work with the finest organic and locally sourced raw material when possible. The secret to Clive’s signature egg replacement – which has the perfect eggy quiche texture – is created using okara, which is the whey from making soya blend. Ingenious given the company’s minimal waste policy. Kala Namak, a kiln-fired rock salt with a distinctly sulphurous tones used in South Asia, is added to create a the unique flavours.

“As a family following a 100% vegan diet we were still seeking that comforting indulgent creaminess in our food, which we created in the Creamy Cauliflower Quiche. The bacon replacement we use in the vegan Quiche Lorraine is tempeh, made locally in Somerset, which we marinated with smoked paprika and maple syrup”, says Esther Pearson.

“Honestly, with food like these quiches it makes plant-based eating really easy and tasty”.

All Clive’s products are 100% plant-based, organic and produced in Clive’s new bakery in Dartmouth, Devon. The packaging is plastic free, which is part of the company’s strategy to lower emissions.

Clive’s has been the UK leader in innovating pie products for more than 30 years, and despite the challenges of COVID 19 over the past year, the company has successfully expanded into larger production facilities and is working towards BRC accreditation.

A moment of spiritual enlightenment in the 1970’s transformed a Devonshire man called Clive from ordinary bloke to animal loving plant pie-oneer. Vouching to do right by all living creatures, he dedicated himself to making amazing pies purely from plants. Now that he’s retired, Clive’s is no longer one person, but all of Clive’s, a family run business, proud to share his original vision and can-do attitude.

Focusing purely on the power of plants, Clive’s range has evolved from a Mushroom Pie sold off the back of a bicycle, into a range of pies, tarts, roasts and now quiches, that are 100% vegan and organic and many gluten-free.  Clive’s Creamy Mushroom Pie is still a bestseller!

Clive’s is always looking to do right by the planet, hence their decision to use recyclable packaging which is 100% Plastic-Free.