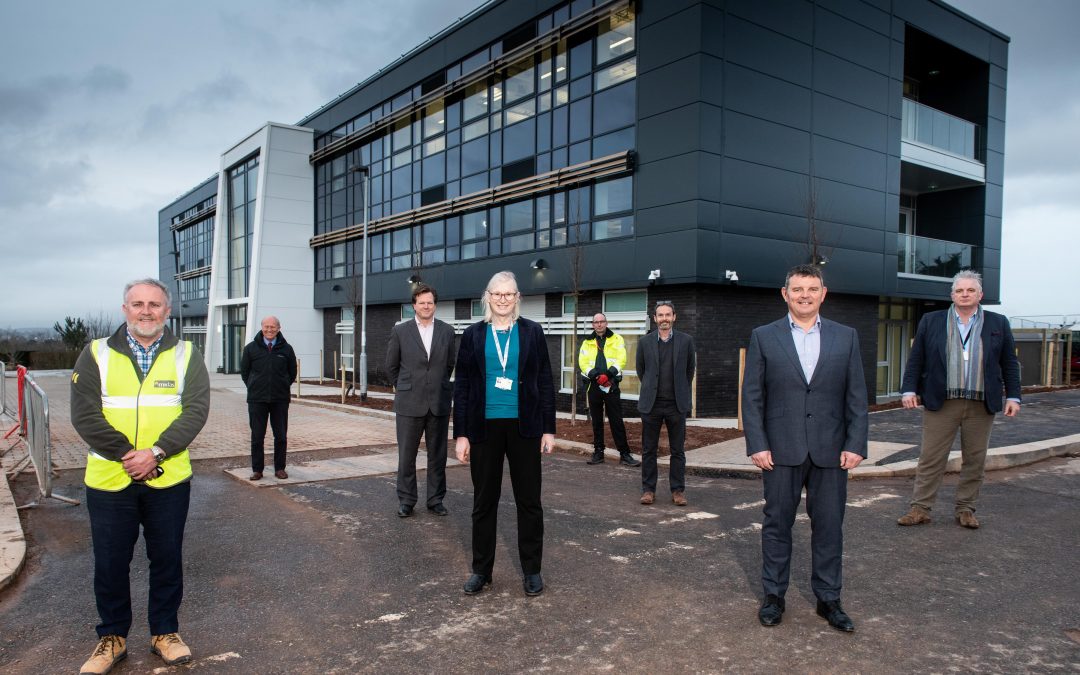 The 20,000 square foot Ada Lovelace Building, just off Junction 29 of the M5, will be let to various companies in the science, technology, engineering, maths and medicine (STEMM) sectors.

The development will bring new jobs to Exeter and East Devon and will help to drive productivity and economic growth. Situated over three floors, its internal workspaces can be reconfigured to suit the needs of tenants. It will also be net-zero-carbon for operational energy as a result of design features including 44kw solar voltaic roof panels.

There are currently around 500 people employed by the tenant businesses at Exeter Science Park and projections forecast a seven-fold growth over the next 15 years, taking employee numbers to 3,500 by 2035.

Dr Sally Basker, CEO of Exeter Science Park, explained: “Our mission is to help innovative STEMM companies deliver extraordinary growth and the Ada Lovelace Building offers a prime space for knowledge-based companies to achieve great success, thanks to the location, the environment and the collaboration opportunities.

“We are extremely proud to be in a position to deliver a building that will support STEMM businesses now and in the future, both those from the Science Park looking to take their next step and new firms looking to relocate and grow. This building has been completed despite the challenging economic climate and Covid-19 restrictions, which is testament to the collaboration of all those involved in making it happen.”

The Ada Lovelace Building has been partly funded by £5.5 million from the Heart of the South West Local Enterprise Partnership’s (HotSW LEP) Growth Deal Funding.

Karl Tucker, Chair of the HotSW LEP, said: “It’s fantastic to see the completion of the work on the new Ada Lovelace Building, which will provide valuable innovation space for STEMM businesses, supporting them to grow and create high value jobs. We’re delighted to have been able to support it with Growth Deal funding, which is designed to boost the economy in key sectors throughout the Heart of the South West area. Exeter Science Park is a thriving business location and has an important role to play as we look towards local economic recovery and building back better with a cleaner and more inclusive economy.”

East Devon District Council’s Cabinet has invested £660k in the development of the building in conjunction with Devon County Council, as part of the Exeter and East Devon Enterprise Zone programme.

Councillor Dan Ledger, Chair of Exeter and East Devon Enterprise Zone Board and East Devon District Council’s Portfolio Holder for Strategic Planning, said: “We are pleased that further zero carbon employment space is available to boost the East Devon economy in these challenging times.  This will provide opportunities to STEM businesses to develop and support the economic future of the district.

“This is another project that has been supported by the Exeter and East Devon Enterprise Zone programme, with a £660k grant.  The Enterprise Zone designation is supporting businesses to invest in the East Devon economy, delivering great results for businesses and residents.  Can I thank all those who have worked tirelessly to get this project completed during adverse conditions.”

The Ada Lovelace Building has been designed by architects LHC Design and KTA, working for NPS South West Property Consultants. It has been built by Midas Construction, part of the Midas Group.

Mike Borkowski, Business Development Director at Midas Construction, said: “As a business which grew out of Exeter, it has been wonderful to be involved in creating this innovative facility and we are incredibly proud of the finished result as we celebrate the handover of the new building.

“This is a project that will boost employment and economic growth for Exeter Science Park, the city and wider region in the long term, and we are pleased to have kick-started that process working with the project team, partners and SCF to support skills development, local employment and providing more than 100 weeks of on-site apprenticeship training during the build.”

The Ada Lovelace building is named after the 19th Century mathematician and computer scientist. It was chosen by students attending the ‘Big Bang Fair’ at Westpoint Arena in 2019, where an overwhelming majority of schoolchildren voted for Ada Lovelace from a shortlist of three inspirational figures.

It’s the 4th building to be delivered by Exeter Science Park Limited. The past four years has seen the opening of the multi-million-pound Lamarr, Newton and Turing buildings, providing “grow-on” space for STEMM businesses. Construction work has also begun this month on the new £5 million Grow-out Space Building, another specialist centre for fast-growth businesses.

To find out more about Exeter Science Park, visit www.exetersciencepark.co.uk.