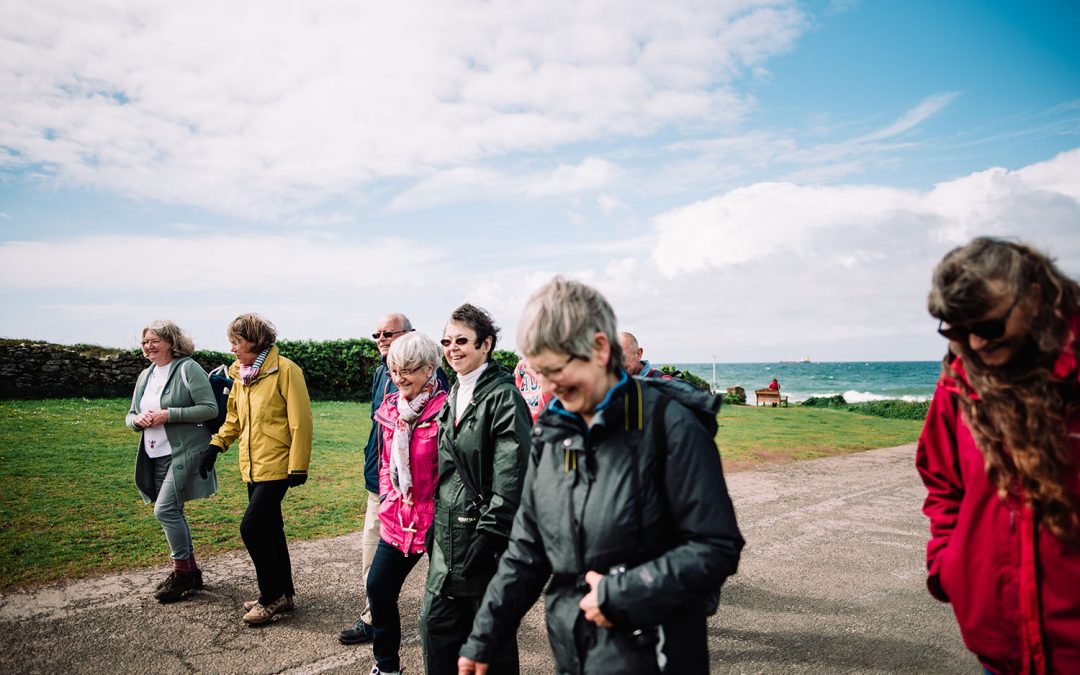 The report, commissioned by the South West Coast Path Association and undertaken by the University of Exeter, looked at different approaches to measuring the benefits of walking and spending time in green and blue spaces. Two methodologies were used to calculate the economic benefits, firstly to measure the number of premature deaths avoided by walking the Coast Path, and then a separate calculation to estimate the healthcare savings linked to a reduction in ill health and disease.

Author of the report, Dr Carolyn Petersen, based at the Centre for Rural Policy Research (CRPR) at the University of Exeter said:

“Exercising outdoors, and the health and wellbeing benefits associated with being in natural environments have taken on a new importance, especially during the coronavirus pandemic when other activities have been severely limited. This report is timely and shows the important benefits of walking on the South West Coast Path for both physical, and mental health & wellbeing.”

The World Health Organisation’s Health Economic Assessment Tool (HEAT) was used to calculate the physical health benefits based on the number of premature deaths avoided. With over 9 million visits along the 630-mile long Coast Path a year, an estimated £69.1 million is saved in avoidable deaths. From this total, £5.5 million can be directly attributed to people walking on the National Trail who wouldn’t be walking elsewhere. The research also shows locals living within 10 miles of the South West Coast Path gain the greatest health and wellbeing benefits, valued at £2.8 million a year.

University of East Anglia and Sport England’s Model for estimating Outcomes and Values in the Economics of Sport (MOVES) was then used to calculate the wider benefits of walking the Coast Path. A further £7.4 million in healthcare cost savings to the NHS was linked to a reduction in ill health and disease.

“During the pandemic, the Coast Path has attracted new walkers and runners as people reconnect to nature as an escape during these challenging times. Through this research we now are starting to better to understand the economic value of these health benefits to society – benefits which dwarf the costs of maintaining and enhancing this world-class Trail.”

According to research commissioned by Sport England[1], almost two-thirds of adults consider exercise to be more important than ever during the COVID-19 crisis and 65% believe exercise is helping them with their mental health during the pandemic. The recent People and Nature[2] survey by Natural England highlighted that a large majority of adults agree that green and natural spaces are good places for mental health and wellbeing (89%) with 42% stating that ‘nature and wildlife is more important than ever to my wellbeing’. These results are supported by a survey that the South West Coast Path ran during the first national lockdown, which showed 80% of respondents agreed that they feel more positive after walking on the Coast Path; three quarters said that they ‘feel less stressed’; 57% said they feel able to sleep better and 62% feel inspired to be more active.

“£75 million is an underestimate as it doesn’t take into account the wider mental health and wellbeing benefits of walking, reconnecting with nature and accessing the coast and countryside” says Carol Grant, Chair of the Coast Path’s Health & Wellbeing Working Group.

The report shows that recreational visits to the coast in England, particularly for walking, are more likely to be made by people from lower socio-economic backgrounds compared to other natural environments (such as woodlands). This indicates further potential for the South West Coast Path to support the health and wellbeing of a much broader audience, such as those who are inactive, socially isolated and socio-economically disadvantaged, along with Black, Asian and Minority Ethic (BAME) groups.

Since 2018, the South West Coast Path Association has been co-ordinating a series of community engagement projects to utilise and share the Path’s health and wellbeing benefits with groups that don’t or can’t normally use the Coast Path. One such project is Couch to Coast, which is part of the Connecting Actively to Nature (CAN) programme in partnership with Active Devon. This project focuses specifically on targeting inactivity in people living in Devon aged over 55. The report identified a total economic health and wellbeing value of over £24,000 a year for this flagship project, which does not take into account the additional value of the mental health benefits.

South West Coast Path Project Officer Alex Turner said “We are also seeing a new and more diverse audience choosing to explore the National Trail and this expanding use gives us real opportunities to engage with new communities to bring greater health and wellbeing benefits, and help reduce health inequalities.”

In addition to this work, the charity has been leading walks in partnership with Devon and Cornwall Refugee Support (DCRS) to introduce asylum seekers from countries such as Lebanon, Kuwait and Ethiopia to introduce them to the South West Coast Path. The charity hopes to secure funding to continue and expand both areas of work.

To find out more about the health and wellbeing on the South West Coast Path, and to access the full report, please visit: www.southwestcoastpath.org.uk/health