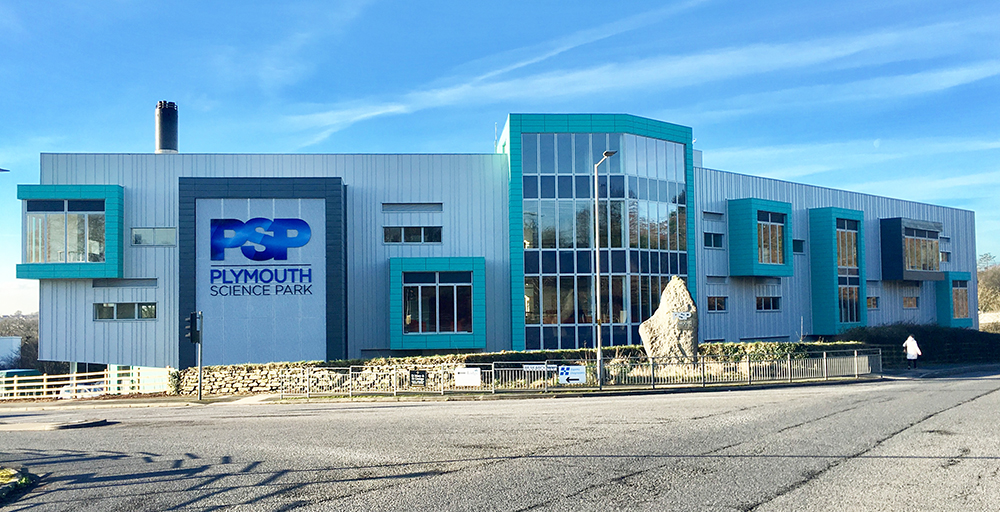 And that growing innovation pipeline is accelerating, with 23 companies joining the park in the last 12 months alone.

Plymouth Science Park was established as a joint venture between University of Plymouth and Plymouth City Council in 1996 to support the growth of the region’s economy. The fifth and most recent phase of development at Plymouth Science Park was partly funded by £3 million Growth Deal funding from the Heart of the South West Local Enterprise Partnership. This flagship building, which opened in 2017, is currently home to nine highly successful PSP businesses. The close connections with the founding partners remain and PSP located businesses continue to benefit from tailored support and access to a wealth of University of Plymouth facilities, research and technical expertise.

Sponge, Moortec, Acronyms, Chess Dynamics, Argans, Re:Cognition and Ultra-Cardiac are just some of the growth brands at the park, developing cutting-edge products and services, making use of world-class research and business environments available at the park and across the city.

And, in 2019 they were joined by the likes of magicseaweed, Fairhurst, Sentinel Healthcare and Cunninghams on the 25-acre campus, part of a thriving knowledge-based ecosystem.  Tenants on the campus represent a range of key sectors including advanced engineering, technology, digital economy, marine and health & wellbeing operating across Plymouth, the Heart of the South West and exporting their goods and services internationally.

The influx of new arrivals takes the total number of brands now operating from the park to 95, with more set to be announced in the coming months.

Ian McFadzen, the park’s CEO, said: “Plymouth Science Park has been home to thousands of people who have brought science and technology innovation, economic growth and prosperity to the region for nearly quarter of a century, many of which have had truly positive and profound impact.

“For us now it’s all about looking ahead. Science and technology will never stand still which is why we’re incredibly excited by the rapidly developing ecosystem we are proud to be part of. Tech is the fastest growing sector in the UK. Science will deliver solutions to some of the world’s most urgent needs. From solving environmental challenges and applications for artificial intelligence, to health tech for ageing populations Plymouth Science Park companies are truly at the forefront of so many fields.”

Key highlights in the past 12 months have included the continued growth of Kovia & Argans and significant growth of Chess Dynamics, developing advanced engineering solutions for the defence sector, as well as software companies like RoweIT recruiting local graduate talent.  Continuing its growth, digital learning company Sponge was acquired by Aliter Capital in November 2019 to form part of a larger group. Working with some of the world’s biggest organisations, around 40% of Sponge’s revenue comes from overseas markets. Tech company Moortec Semiconductor, which has its head office on the park, opened their third site, in Bristol and continues to go from strength to strength.

And just under a fifth of all the tech companies announced so far on this year’s South West Tech List by Reach are based on the park – magicseaweed, Sponge, The Key, Webbased, Pixalytics, BluescreenIT and Microtest.

The UK’s top surf forecast website and app were developed by magicseaweed, covering close to 6000 beaches in 199 countries. Pixalytics works with companies all over the globe  requiring satellite and airborne data and The Key delivers digital tools and leadership management to nearly half the schools in England.

Sponge’s Founder and Managing Director, Louise Pasterfield, said: “Plymouth Science Park has supported our expansion over the past 16 years. In fact, business growth has meant we’ve moved seven times within the park. We’re pleased to retain our Plymouth HQ as we continue to expand as part of a larger learning group. We’re proud of our South West heritage and focused on growing our Bristol base. And what could be better than working from an office surrounded by green fields and wild deer?”

The winning teams from the latest ‘TechStars Start-up Weekends’ BigSis Project and previously, MemoryPad, are now based at the Park working on their growth plans.

Adrian Dawson, Director of Research and Innovation at the University of Plymouth, said: “Plymouth Science Park has changed considerably over a quarter of a century, and we can all be very proud of the progressive and collaborative role it plays in the science and technology landscape of the South West. It is both an anchor and an accelerator for the economy and has created an innovation ecosystem that is benefitting some of the most exciting young businesses around.”

The collaborative approach saw the Park help set up the new Plymouth Health Innovation Alliance and create a bespoke patient facility with tenant Re:Cognition as part of ‘Transform MS’, a Community Interest Company established to support sufferers of Multiple Sclerosis and other neurodegenerative disorders, in partnership with the University of Plymouth and the University Hospitals Plymouth NHS Trust.

Council leader, Tudor Evans OBE said: “Plymouth Science Park has gone from strength to strength and we are chuffed to bits to see that since its inception in 1996, it continues to attract and support exciting new businesses.

“The park was set up to tap into and to keep entrepreneurial talent coming through the University in Plymouth and to forge links between starts-ups, established business, the research community and our key sectors such as the medical/life sciences cluster in and around Derriford Hospital. The figures speak for themselves: nearly 100 businesses, employing over 1,000 people, and a combined turnover of over £100 million.

“I think it is fair to say the results have been phenomenal. We have companies at the cutting edge of data from space, from the oceans and inside the human body. There are some truly boundary breaking teams based right here in Plymouth, setting the groundwork for the next generation of high growth companies and high value productive jobs.”

Karl Tucker, Chair of the Heart of the South West LEP, said: “It is great to see the impact that Growth Deal funding has had at Plymouth Science Park. Total funding of £6.96m has created almost 3,000m² of new and refurbished space and 190 jobs. The funding for Phase 5 will provide a high quality IT Hub for developing businesses. The hub will act as a regional catalyst for IT and digital business, focusing on digital innovation, development and capability.”

Fay Davies, Business Development Manager at the Park, said: “These are exciting times. New brands will be joining us to make use of the array of facilities here, and collaborate with academics and scientists, work with researchers and other partners, both on the park and the wider health campus, and across the marine, science and technology ecosystem that continues to evolve and expand.

“And of course we will continue to work with and support emerging entrepreneurs, University of Plymouth graduates and spin out companies, right through to fully-fledged high-growth national and international businesses.”

To find out more about Plymouth Science Park visit www.plymouthsciencepark.com