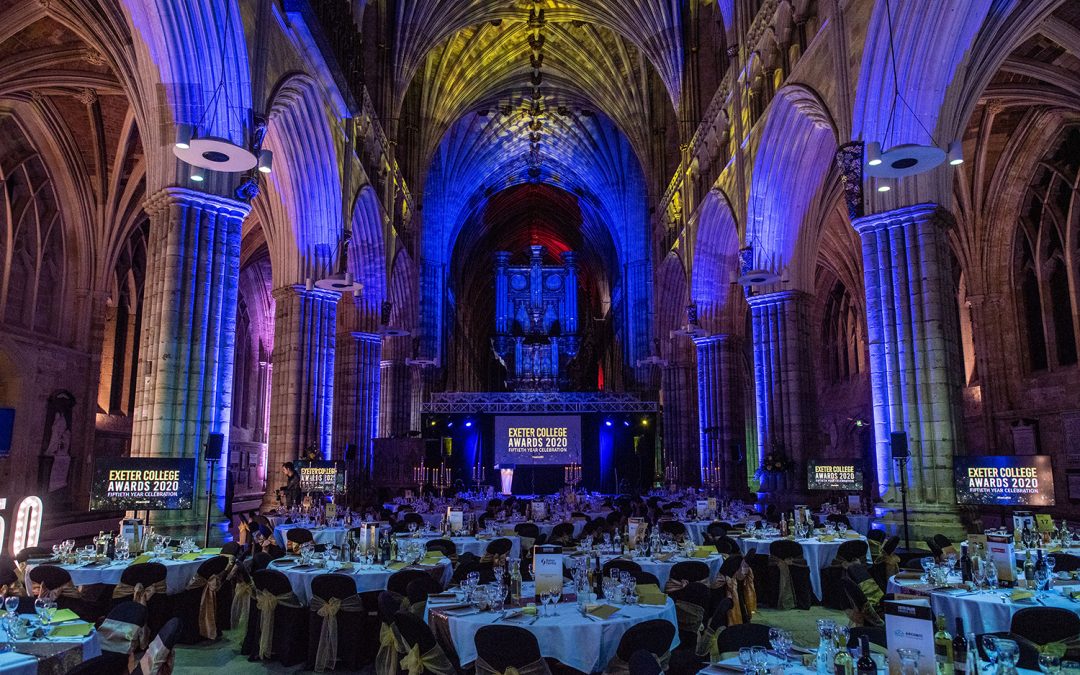 The exceptional learners of Exeter College have been celebrated at a glittering awards ceremony held in the stunning location of Exeter Cathedral.

The Exeter College Awards 2020, supported by headline sponsors Foot Anstey and Willmott Dixon, aim to shine a light on inspirational achievements of students throughout the previous academic year, with 20 awards handed out to students throughout the night as learners were recognised for achievements in higher education, further education and personal triumph over adversity.

This year’s awards were especially poignant as the college reflected on 50 years since being named as the UK’s first ever tertiary college in 1970. Guests were treated to a two-course meal as the community joined together to celebrate students, alumni, staff and partners that have contributed to the success of Exeter College today.

Students from across the South West travelled to the event, highlighting the far-reaching appeal of Exeter College to learners as the ‘Class of 2019’ was formally celebrated at this showpiece event.

Exeter College Principal and Chief Executive John Laramy said, “It has been a real privilege to celebrate the accomplishments of some of our high performing, exceptional learners at this terrific awards event.  This year, as an innovation, every student that was nominated for an award will be given a highly commended certificate, which is our way of recognising that we have a large and growing number of simply amazing students!

“To see our students again and hear their achievements and what they are up to now is incredibly inspiring, not just for those of us at the awards but also for those students who are thinking of joining the college.”

The latest academic year has certainly given those at the college reason to celebrate, as FE Week’s NICDEX once again ranked Exeter College as one of the top further education providers in the country, alongside remarkable results in a host of academic, vocational and professional courses.

John continued: “Students and staff, yet again, made 2018/19 an exceptional year.  To give one example, students achieved record results in our International Baccalaureate; the best in our 20 year history of delivering this demanding international qualification. In relation to staff, we were delighted that our staff ranked the college as a Sunday Times ‘Best Companies’ Top 100 Employer. We recognise that to be successful we need fantastic students and great staff; it is this combination that creates a magic formula.

“Our Student Awards evening is always a highlight of the year but this event has been especially momentous as we looked back on our first 50 years since becoming the UK’s first tertiary college.  I want to take this opportunity to thank everyone; students, alumni, staff, former staff, employers and partners for supporting us over the years.  The event was epic and a spectacular way to start the next 50 years!”