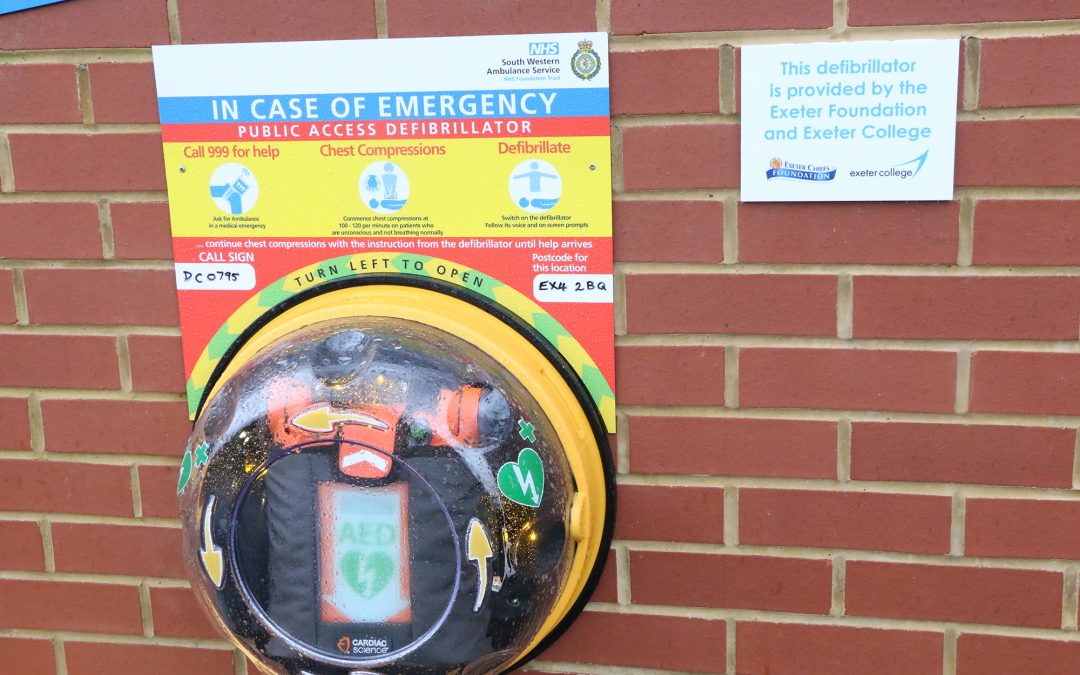 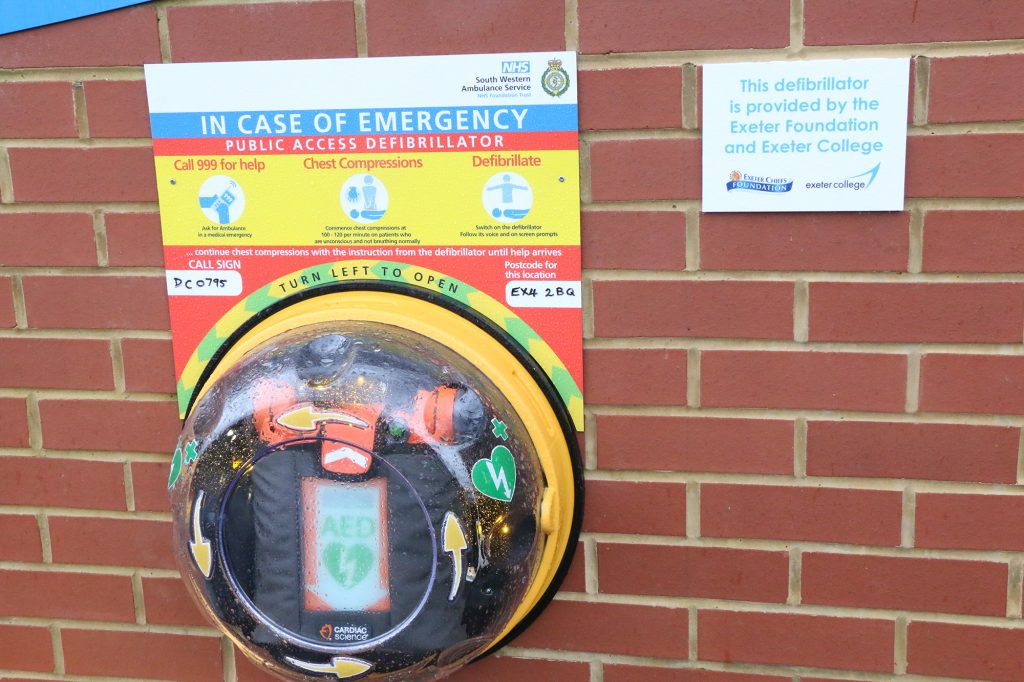 Exeter College is expanding the number of defibrillators at college sites thanks in part to the support of the Exeter Chiefs Foundation.

The college is renewing its four-year contract with the South Western Ambulance Service NHS Trust and gaining an additional four defibrillators across college sites, two of which have been paid for by the Exeter Chiefs Foundation at sporting venues. This brings the total number of defibrillators at Exeter College sites to seven, providing people the vital equipment necessary to potentially save someone’s life following a heart attack or cardiac arrest.

The move to improve the number of defibrillators was hastened following an incident when local resident Mark Walters suffered a heart attack when playing football at the college’s Exwick Sports Hub last year. Despite no defibrillator being present at the time, Mark survived thanks to the quick thinking of two fellow footballers who worked in healthcare. The pair administered CPR until an ambulance arrived with a defibrillator to help restart Mark’s heart.

The new device being installed at the Sports Hub will provide a crucial lifeline for anyone in a similarly perilous situation to the one Mark was in.

Mark, who is now back to full physical health, was delighted to see the new facility installed at Exwick Sports Hub.

“It’s great to see this new equipment get installed down at Exwick,” said Mark, 56, who had no warning signs that a heart attack was imminent.

“Hopefully the equipment will never be needed, but if it does then it could save someone’s life. I feel like I’ve won the lottery because I managed to survive my heart attack but if me going through that could help someone else in the future with this equipment then that’s great.”

Mark is now back playing football every week and even played in a charity match to support Jay’s AIM, a charity that aims to prevent sudden cardiac death in the South West.

The defibrillators are designed so that anyone can use them and can be accessed by a simple twist of the cover. Step-by-step instructions ensure that whoever is administering the lifesaving treatment has all the information they need to accurately and safely perform the procedure.

The Exeter Chiefs Foundation is supporting the installation of new defibrillators at Exwick Sports Hub and Flowerpots Playing Fields, with the college also installing new defibrillators at Falcon House and the Technology Centre, complementing the existing devices in the Centre for Creative Industries, Haven Banks and in the foyer of the Tower Building.

The Exeter Chiefs Foundation was launched in 2011 with the aim of supporting the community of Exeter and its surrounding areas. They have now raised over £1million for local charities and organisations and their support of Exeter College’s new defibrillators is the latest in a long line of achievements for the Foundation.

Safety, Health & Environment Adviser at Exeter College Mike Loomes was pleased to be able to improve the access to defibrillators throughout the college, with some members of staff also given additional training on how to use the equipment.

“We’re thrilled we have been able to improve the number of devices we have available at college sites,” said Mike.

“We really want to thank the Chiefs Foundation for helping support this project. It’s not an exaggeration to say that these defibrillators could save lives and we’re delighted to now have seven devices across college sites. While we hope no one ever has to use them, we’re pleased to be able to have these defibrillators installed that could help someone in a time of extreme need.”

Exeter College defibrillators can now be found at the following sites: