Volcanoes, monkeys and turtles in Costa Rica trip of a lifetime 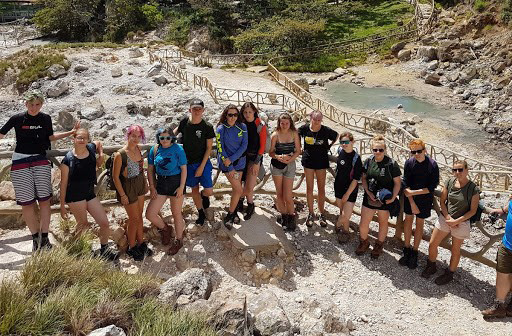 A group of students from Cornwall have returned from a life changing trip that saw them releasing hatchling Leatherback turtles by the hundreds.

The Duchy College students headed to the Caribbean coastline of Tortuguero National Park, in Costa Rica, were they volunteered at a family-run turtle conservation project.

Their roles included night patrols, beach cleans and releasing hatchling Leatherback turtles. They were also lucky enough to see a rare Hawksbill turtle laying her eggs in the sand.

The project base was fringed by rainforest and animal species were in abundance.

Students were woken each morning by howler monkeys and treated to a wide range of bird life, reptiles, amphibians and insects. One of the main highlights, was the sloth that was a frequent visitor to camp, as well as a large Caiman that could be seen in the water nearby.

Student, Alisha Best, said it was “a life changing experience”.

“I got to take part in so many different activities that I never thought I’d get the chance to do,” she continued.

“Staying in a remote location meant that we could appreciate the beauty of the area. I loved seeing animals in their natural habitats.”

“It was an unforgettable experience, but the highlight of the trip for me was the crocodile boat trip where a monkey climbed on my head,” she continued.

“I also loved going to the Volcano hot springs as I had never done anything like that before.”

The group had a scenic trip back through Braulio National Park, where they took an aerial tram through the rain forest and saw a beautiful, but deadly, eyelash viper. They then headed to the other side of Costa Rica to Marino Ballena National Park.

They took a boat trip out into the bay, where they observed a mother humpback whale and her calf. Quite a breath-taking experience for everyone. Moving onwards, the next stop was Manuel Antonio National Park, where they enjoyed an informative guided walk and bird species in abundance.

The next destination of the trip was the town of Esparza. They visited a toucan rescue ranch, where conservation work such as rearing and reintroducing orphans takes place. The species of the day were the sloths, we were introduced to a range of ages of sloth, the highlight being the tiny babies that appeared in a basket, curled around each other for warmth and security.

They visited the Maritime Park in Puntaranas and a wild bird sanctuary with red macaws flying overhead.

The penultimate day took them to an active volcano, where they took a tractor ride and walked up into the surrounding National Park with death defying hanging bridges.

The final day saw the students coming face to face with some of the biggest crocodiles found in Costa Rica as well as some amazing bird life on a boat tour.

“They all gained a lot of knowledge of the wildlife as well as learning a lot about the culture,” she added.