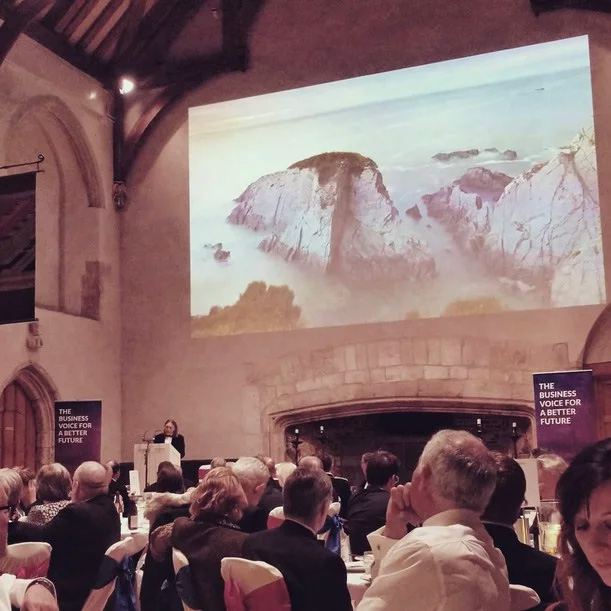 Members of the South West’s business community have come together to raise £1,400 for the South West Coast Path – the amount needed to look after one of its 630 miles for one year.

Over 100 representatives from Devon, Cornwall and Somerset’s most influential and fastest growing businesses attended the South West Business Council’s annual dinner at Dartington Hall to celebrate a successful year for the region and to raise much needed funds for the Trail that links up the great South West region.

Tim Jones, Chairman of the SWBC said “We are delighted to be supporting the South West Coast Path Association as our nominated charity. It’s wonderful that representatives from the business community attending our recent annual dinner donated so generously during the course of the evening. The South West Coast Path is a fantastic asset for the whole region and we look forward to working with the Association during the months ahead.”

The South West Coast Path generates over £500 million per year for the region’s economy, supporting over 11,000 jobs. The unparalleled access it offers to the region’s breath taking coastal landscape is also one of the key incentives for many business owners and their teams to base themselves in the South West. Raising funds through a combination of donations and a silent auction, the South West Business Council members wanted to give back to the National Trail, in recognition of all that it gives to their community.

Julian Gray, Director of the SWCPA said, “It’s great to see our national landscapes at the top of the agenda at important events like this. We’re really grateful to have the support of so many key members of the business community who recognise the value in protecting the Coast Path. We hope it inspires others to want to give back in some way.”

Exeter Racecourse, The Dartmouth Hotel, Dartington Hall, Camel Valley, Sea Arch and Clive’s Pies were amongst those donating prizes to raise money for England’s longest and most iconic National Trail and one of the world’s great walks.

The Coast Path attracts some 9 million visitors a year and provides people living in the South West with a place to walk, run or simply spend time outdoors. In a recent government review of Protected Landscapes, it was estimated that walking or riding on National Trails could save the NHS £167m a year in health benefits.