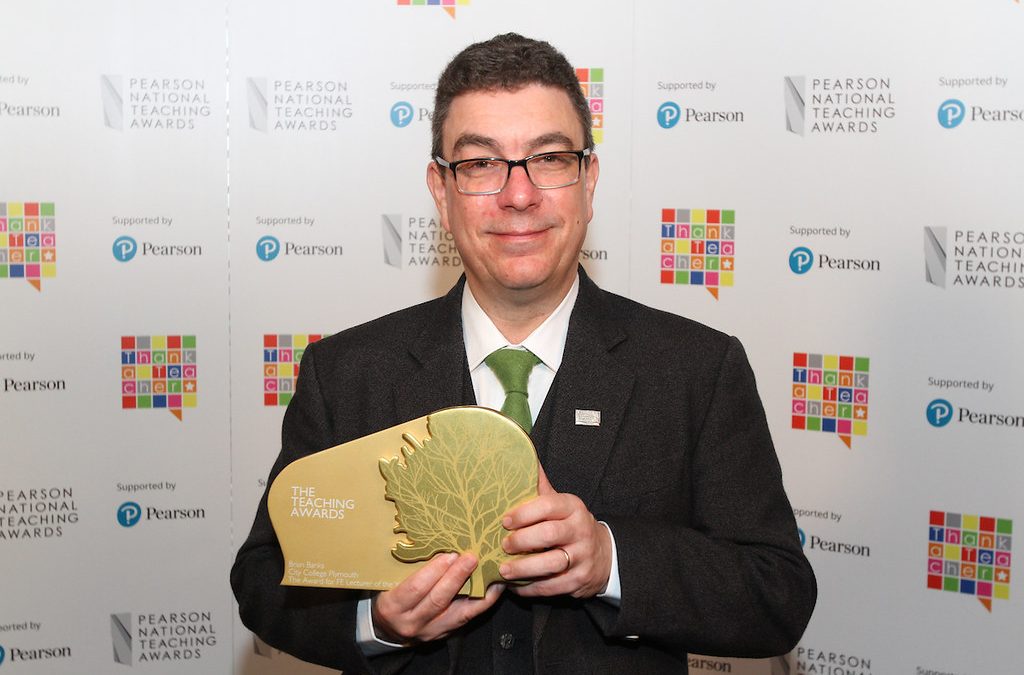 Selected from thousands of nominations, City College Plymouth’s Access to Biology Lead, Brian Banks, was named as one of the nation’s most inspirational teachers at the Pearson National Teaching Awards on Sunday 20 October.

Originally from Belfast, Brian won a “People of the Year” award for his work with sixth former pupils as part of a Northern Ireland Peace Project in 1990 and served as a medic in the Territorial Army, before finishing his PGCE and teaching at a college in Northern Ireland. He has been at City College Plymouth for five years and during this time been praised by colleagues and students alike for his infectious enthusiasm and passion for teaching biology.

College Principal and Chief Executive, Jackie Grubb, says: “Brian is an exceptional role model to his students and colleagues and I am delighted that he has been recognised with this prestigious national award. Brian’s commitment, support and inspirational approach to teaching and learning make him a highly respected lecturer whose energy is infectious. Brian’s lessons are extraordinary and his techniques and inventiveness are now legendary at the College.”

On receiving his award, Brian said: “It feels wonderful and difficult to take in. Within the College’s Access to Higher Education team there are some superb lecturers and I think because we’re dealing with adults, we don’t always get the recognition we deserve. But these adult learners are going to be some of the top paramedics, the top nurses and the top legal people when they pass their qualifications, so we’re taking all this wonderful untapped talent and putting it back into society. What we are doing is important, and the people I work with are fantastic at it.”

Brian was presented with a trophy during a ceremony at the Roundhouse in Camden to celebrate his outstanding achievement. The ceremony will be broadcast on BBC2 on Saturday 26 October as “Britain’s Classroom Heroes”, starring hosts Sean Fletcher, a regular sports presenter on Good Morning Britain and Countryfile presenter, and Tina Daheley, a well known newsreader on the Radio 2 Breakfast Show and regular presenter on Newsbeat.

Those interested in studying an Access to Higher Education course and being taught by award-winning lecturers, can explore the training options available at the College’s Open Day on Saturday 2 November, 10.00am to 1.00pm.