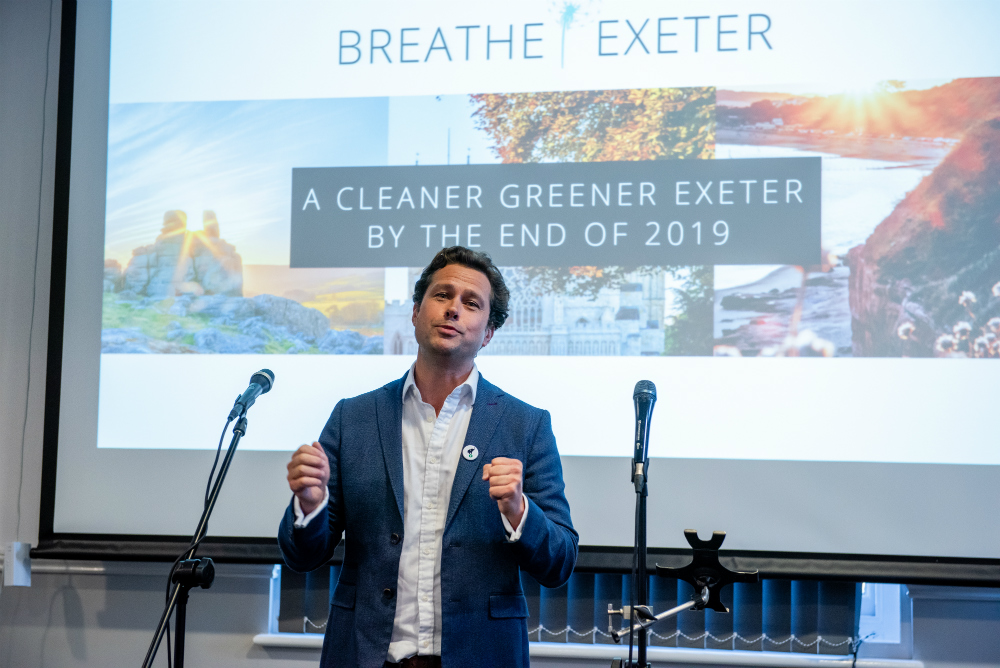 Image by Matt Round.

Business leaders from across Devon have celebrated the launch of a major new initiative to improve air pollution in Exeter and across the county. With the aim of removing the equivalent of 1,000 cars’ worth of emissions from the city’s air by the end of the year, Breathe Exeter aims to get businesses, public sector organisations and private drivers on board with new technology that helps motorists slash their vehicles’ emissions.

Over 45 businesses attended the event held at Exeter City Football Club, designed to build rapid engagement and involvement among drivers wishing to play their part in making Exeter a “cleaner, greener” city by the end of 2019.

Martin McCourt, former CEO of Dyson and now non-executive chairman of Lightfoot, spoke at the launch event. He said: “Breathe Exeter has the potential to start an international movement to instantly and permanently reduce pollution and emissions in our cities.”

He added: “London’s Mayor Sadiq Khan should take note of the initiative which has the potential to remove thousands of tonnes of emissions each year air through Lightfoot’s smart technology that helps drivers be better, safer and more environmentally friendly.”

Major investment in the city

Lightfoot, which is investing over half a million pounds in Breathe Exeter, aims to achieve its goal by installing its in-car technology, often described as “the Fitbit for cars”, in at least 5,500 vehicles by the end of the year. In so doing, this will remove roughly 550 tonnes of pollutants from the city’s air.

Speaking at the Breathe Exeter launch event, Mark Roberts, founder and CEO of Lightfoot, said: “We know that smoother driving is better for the environment. Through Breathe Exeter, we have the opportunity to start a positive driver movement before going further afield up the M5, across the country and across the world.

“Movements like Extinction Rebellion and the Blue Planet series have put environmentalism firmly on the social agenda. Climate change is undeniable but there is a danger that people are looking at what we’ll be doing ten years down the road, rather than now. Breathe Exeter is an immediate solution to a very real problem that affects us all; we all breathe the same air.

“With Lightfoot we can all make a significant impact for the good. We can all play our part in creating a better environment for everyone in Exeter – whether you drive or not – simply by dealing with the cars that we are driving right now.”

He added: “Businesses and individuals joining us on this journey have a huge part to play in making a positive difference to the city and their families. Jointly, we can create a blueprint for other cities to follow, providing a social movement for change that can have a bigger, more immediate impact than slow-moving national policy. Together, we can dramatically cut CO2, NOx, and particulates through one simple action – smoother driving.”

How to play your part in Breathe Exeter

Lightfoot is available at just £149, plus a £3.99 monthly subscription, or at £9.99 per month, plus £1 for the device. Lightfoot can save drivers up to £700 a year in combined savings and earnings, through improved fuel economy and the Lightfoot Rewards platform.

Its high-tech analytics and configurable in-cab feedback enable users to maintain a driving style that keeps their engine in its ‘sweet spot’ – where it uses the least fuel, emits the least pollution, and is most efficient.

Lightfoot’s technology has been widely used in the fleet sector by household names including Virgin Media, Greencore, and South West Water. It has also been trialled by private motorists in Exeter over the past two years, enabling the company to refine its technology and rewards platform in readiness for Breathe Exeter. Lightfoot users typically see reductions in fuel costs by up to 20%, harmful emissions by 20%, at-fault accidents by up to 40%, and wear and tear costs by 45%.