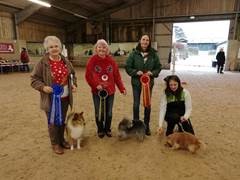 A stampede of paws descended on Duchy College from all over the South West to take part in the Canine Christmas Capers Dog Show in aid of the Monkey Sanctuary.

Duchy Dashers flyball team were on form, holding a race off between their mascot and Michies Dog Foods mascot, which also entered the best pair show class. There was even a Man versus Dog race.

Student, Zoe Chaffe, said running the dog show was a challenge “especially as there were only seven of us, but all in all it was a fun filled day”.

“Although there were many other events being held on the same date the turnout was amazing,” she continued.

“We received good reviews and were delighted at how smoothly the day ran. We were rewarded on the day by the lovely comments from the competitors and knowing that we were raising money for charity. From my experience it was a fantastic day and I would love to do it all over again”.

When not showing, the competitors had the opportunity to visit ‘Clive the Caravan’, the doggy photo booth and peruse the trade stands selling treats for humans and dogs.

Competitor, Carol Thomas, said “It was a lovely day”.

“All the students hard work has paid off,” she continued.

“It was a very enjoyable show. The icing on the cake was Daisy Mae winning Reserve Best in Show and the lovely rosette she was awarded.”

Programme Manager, Michelle Chappell, said the students should be very proud of themselves organising and running a successful event.

“Valuable skills have been developed during the process and they demonstrated excellent team work especially at the end of the day when packing everything away – well done everyone,” she added.