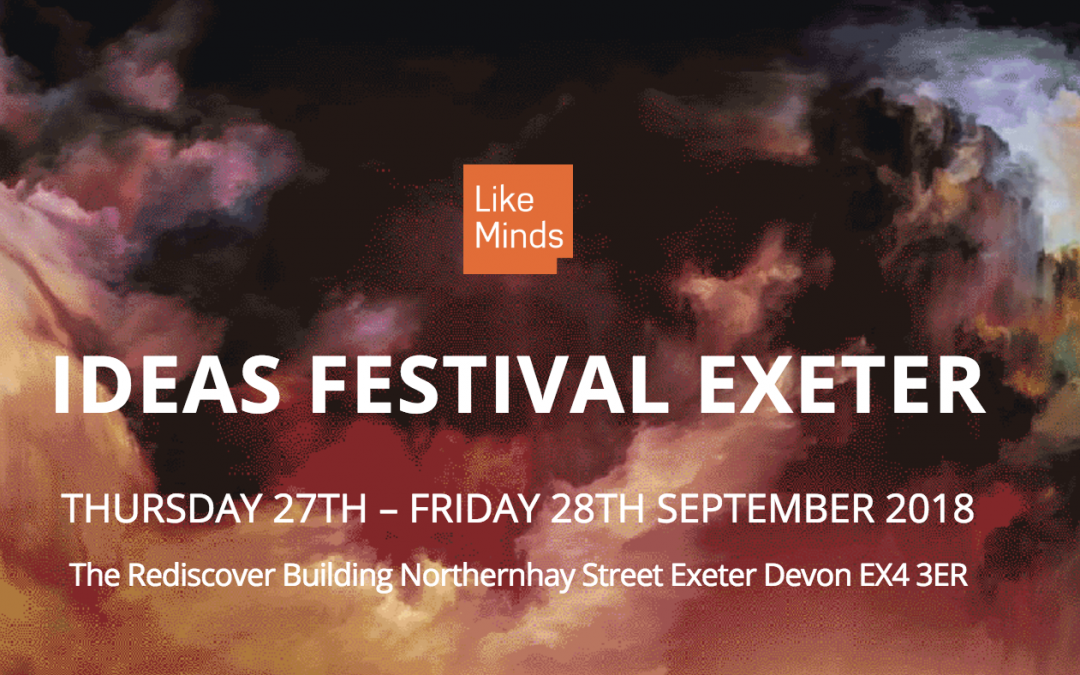 An Ideas Festival founded in the South West that has taken its event to New York and Helsinki, has announced it will be anchoring its two-day event for entrepreneurs and start-ups in Exeter – and founder Drew Ellis has ambitions for the event to become the equivalent of SXSW in Austin in terms of reputation and size.

Attracting and drawing in an impressive selection of acclaimed guest speakers and including over 700 attendees, the Like Minds Innovation & Ideas Festival is putting Exeter on the map as the go-to event for budding entrepreneurs, creatives and businesses. The festival will run over two days from the 27th-28th September and will play host to over 19 guest speakers from across the globe.

Found Drew Ellis comments “We are immensely proud of the festival and thrilled to see how far Like Minds has come in what is, in actual fact, a very short time frame. We have attracted a whole ream of high profile speakers, this year is no exception as we gear up to welcome the Vice President of Twitter. The event gets bigger and bigger year on year and our goals are starting to be achieved.  The SXSW event in Austin started as a small seed in 2009 but has continued to grow every year – it is now known as THE annual conglomerate of film, media and conferences.  If that can happen to Austin, with a little entrepreneurial ambition, Exeter will become known as the place to make innovations happen.”

It seems logical Drew and his team should be as ambitious and as entrepreneurial as the delegates they attract.  It is this spirit that makes Exeter the perfect host city for the festival.  Exeter has fast become a creative hub for scaleups, startups, entrepreneurs, business leaders and innovators. The city has seen a continued growth of transformation with the introduction of Exeter Science Park, development of Exeter Airport, Exeter College and The University of Exeter. According to the latest Tech Nation Report, the evolution of tech in Exeter boosted the economy by a total of £271 million last year, demonstrating a strong tech presence in the city.

Dr Sally Basker from the Exeter Science Park comments: “Exeter Science Park supports innovative STEMM companies to deliver extraordinary growth.  As part of this, we are on-track to be hosting around 700 clients / staff on site by 2021.  This is a game-changer for the Region and we are delighted to partner with Like Minds to stimulate further new high-value jobs, increased productivity and economic growth”.

Dr Robin Daniels, SWBC CEO comments: “Across the whole SW region we see clusters of genuine strength, innovation and employment opportunity. This is a place that can attract investment, a place where people want to live, work and grow their businesses. Exeter is the perfect location for this Festival. The city is economically buoyant, it oozes innovation, and is situated at the very heart of the SW region. We’re delighted to support the Festival’.

Through insights, immersive workshops and networking lunches, over two-days participants will engage with each other, discussing new ideas and forging new connections to help make those ideas become a reality.

The festival will take place at various locations across Exeter, showcasing some of the great spots the City has to offer, from Southernhay’s Exeter City Futures through to entertainment venue, The Phoenix. For those that can’t make it in person, the festival will be live-streamed via social media.

Our members will benefit from a 20% discount on full price 2 day tickets if they use the code SWBC.