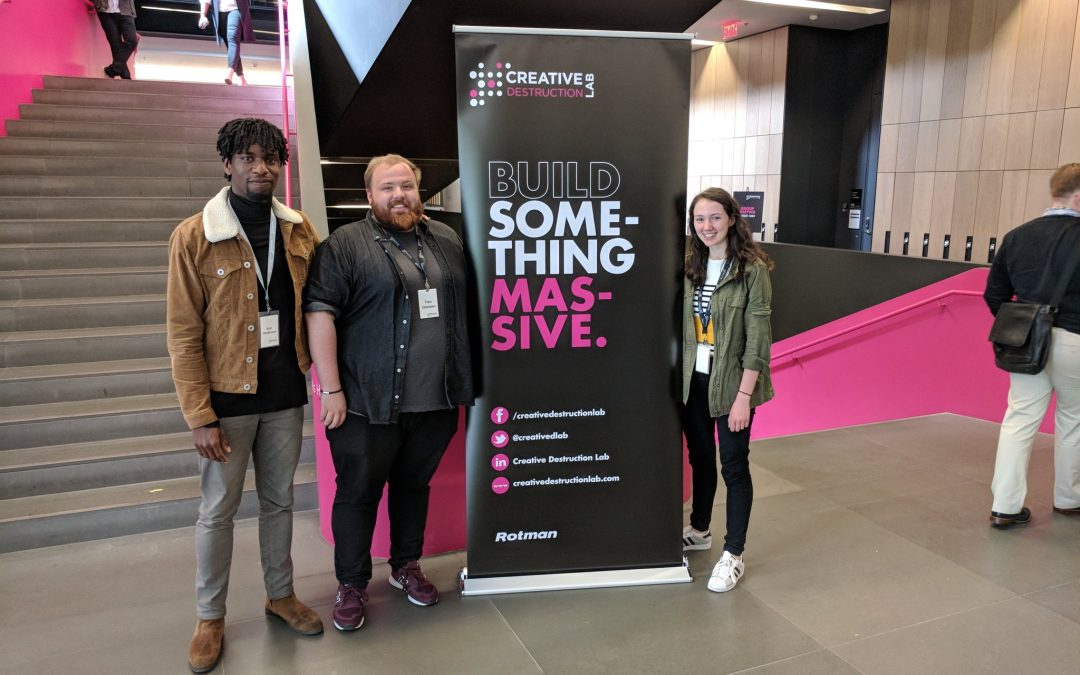 Two entrepreneurs who co-founded their business whilst studying at the University of Exeter are venturing on new ground as they extend their city exploration app, KOMPAS to the west coast of America.

KOMPAS, was devised by Tom Charman and fellow Exeter graduate Olivia Higgs as they were studying in Munich during a year abroad at University. Unimpressed by the lack of inspiring and personalised discovery apps, they set about creating a customisable version of their own. The duo worked with Exeter’s Think:Try:Do Student Startup Programme when they got back to the UK, to develop the concept, and begin to commercialise their research.

Recently, the KOMPAS team graduated from Creative Destruction Lab (CDL) in Toronto. CDL is a quantum machine learning programme from the University of Toronto’s Rotman School of Management. This world-leading accelerator runs from one of the top Universities in the world for artificial intelligence. It provides a comprehensive network of investors and mentors to rapidly scale-up only the most promising AI startups from around the world.

During the demanding selection process, the KOMPAS team were whittled down from several thousand applications, to one of the top one hundred teams. Following ten months of intense work, seventy per cent of these were cut, leaving just thirty teams who graduated from the lab in Toronto.

Tom explained: “We were extremely happy to have been selected for the programme. Since joining the lab, we’ve grown over 500 percent, seen significant advances in our product, have built partnerships with some of the world’s largest businesses and seen exceptional revenue growth. Now we have an equally exciting six months ahead of us, as we explore the North American market, as a potential for growth in the coming months.”

Having participated so successfully in CDL, the KOMPAS team are now involved in Startupbootcamp’s SCALE program, as one of just fourteen teams from a selection of more than five hundred. The program will provide extensive mentoring from Global Scaling Academy, entrepreneurs, investors, and corporate partners in addition to six months of free office space and extensive financial support. The Programme is enabling KOMPAS to setup another office in San Francisco and the city will be the focus for their latest expansion. It’s acted as a perfect extension on the back of the program they’ve just graduated from in Canada.

As Tom and Olivia unravel the city of San Francisco’s secrets for their latest city launch, they have been able to compare and contrast differences of business life in the US to the UK.

Tom clarified: “In the US the hours are longer, it’s much warmer and seriously more expensive. However, Americans are passionate people! They are more accepting of risk and have seemingly greater venture capital experience. The whole process of raising capital is much more focused on the team, and the overall vision of the idea, as opposed to revenue growth”

Following their concentration on the west coast of America and having previously covered Germany and the UK, the next step for KOMPAS is to scale across Europe and begin to roll out their products across North America. They are being supported by investors, advisors, and mentors as they refine their product and technology.

While they’ve had plenty of recent traction in North America, things haven’t died down in the U.K. KOMPAS was shortlisted for The Europas as one of the UK’s Hottest Travel Startups. The Europas are the leading awards for Europe’s best tech startups, celebrating ‘forward thinking, progressive, and innovative tech companies’. KOMPAS was recognised for its use of machine learning and data, to personalise the experience for their users.

On top of that, they were also name as the best mobile travel app of 2018 by TMT media, and have won multiple awards for innovation and technology, particularly for their use of artificial intelligence within the travel industry.

Equally importantly, is that the team are becoming industry experts in the space that they operate in. Tom was recently recognised as one of those included in the 30 South of 30 Power List by Two Fifty-One, and is currently working with the team on writing a white paper on the use of AI in small businesses. Olivia recently gave a TEDx talk on Artificial Intelligence, and is becoming a thought leader in the field.

As a recent article in Startups.co.uk declared, the future is bright for KOMPAS: “It won’t be long before we all use KOMPAS as an essential travel companion to explore the city you live in.”