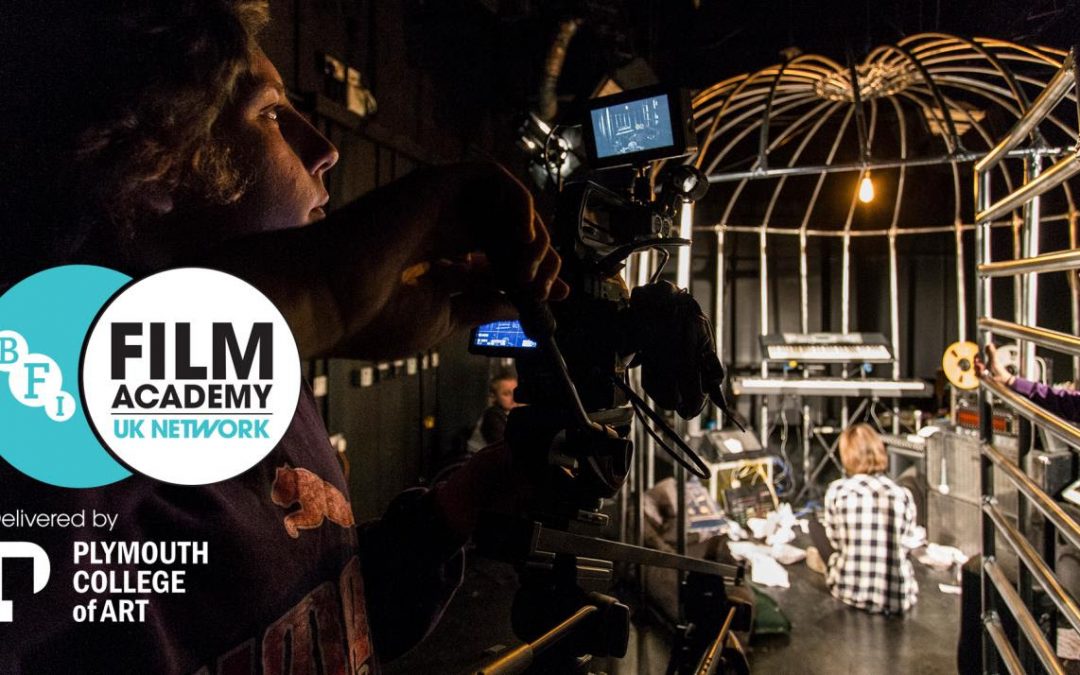 Following the overwhelming success of Plymouth College of Art’s partnership with the British Film Institute (BFI) to deliver the BFI Film Academy programme for budding filmmakers across Plymouth and the South West last year, the provision is being extended and expanded for a second year. A new wave of young people across the South West will now be offered the opportunity to learn from industry-leading figures in an intensive short course designed to provide young artists with practical skills and confidence in creating moving image.

The BFI Film Academy Programme offers hands-on filmmaking courses, aimed at developing knowledge and skills for those passionate about film or looking for a career in the film industry. Filmmaker and Plymouth College of Art Extended Diploma in Film, Animation & Media Production lecturer Billy Abbott will again act as Project Manager for the course.

Aspiring filmmakers aged 16 to 19 are encouraged to apply for one of the limited spaces available on the program, which will take place between October 2018 and January 2019. The cost of the intensive course is just £25 per person, covering over 70 hours of teaching time, as well as use of industry-standard equipment and essential materials. The organisers encourage students who are unable to pay the full course fee to still apply, and advise that bursaries for travel and childcare may also be available if needed to allow participation.

The  BFI Film  Academy aims  to help train  and inspire the  next generation of  UK filmmakers, supporting  talented and committed young  people aged 16-19 to develop the  commercial and cultural knowledge and  skills to help make a career in film  a reality.

The  BFI Film  Academy offers  training for every  film industry role, from  writing and directing through  to production, sound design, editing  and camera, and provides learning around  film history and cinematic storytelling to  inspire an appreciation of film culture in the  round.

The  BFI Film  Academy contributes  to a core aim of the  BFI’s 2022 strategy which  aims to provide everyone with  the opportunity to build a lifelong  relationship with film; to create a clear  progression paths for talented young people and  to ensure that film is celebrated and explored in  formal education.

The  BFI Film  Academy is  supported by  the Department  for Education in  England, the National  Lottery, Creative Scotland  and Northern Ireland.

“A vote of confidence for filmmaking in Plymouth”

Project Manager Billy Abbott said “We’re delighted to be given the opportunity to expand our BFI 16-19 Film Academy for its second year, which is a big vote of confidence for filmmaking in Plymouth. Last year’s sessions were a resounding success, with 100% of students completing their NCFE Level 2 Preparing to Work in the Film Industry qualification, in addition to the extensive range of practical skills and experience that they received on the course.

“Expanding our teaching hours from 57 last year to 78 hours in 2018/19 will allow for more production days, an increased array of fantastic industry speakers and an even greater focus on practical skills. We’ve already seen the impact that the BFI Film Academy Plymouth has had on our alumni; with unique employment opportunities and work experience. One student even landed a job with a former curator for the biggest film festivals in the world!

“It’s great to be able to create unique moments and bring a bit of glitz to South West students. Last year, a day of professional lighting workshops with  producer/director/cinematographer Ivan, who has made films in 57 countries, coincided with the BBC Spotlight film crew filming for the evening news and a BFI film crew documenting the event. It was crazy, in a very good way. I can’t wait to see what this coming year has in store for students!”

Ceri Prowse, who completed the first BFI Film Academy, said: “‘The BFI Film Academy was one of the most informative yet enjoyable experiences of my life. It was fantastic to be surrounded by others who were just as passionate about filmmaking as I am and if I could do it again, I would without a doubt. Being able to work with actors, professional equipment, spending a day with Oliver Stapleton and being featured on BBC Spotlight, were remarkable and exhilarating. The BFI Film Academy really was the opportunity of a lifetime.”

BFI  CEO Amanda  Nevill comments: “Nothing  gives me greater pleasure  than seeing the BFI able to  make a contribution to opening  doors and offering opportunities for  the next talented generation. We know  how important it is for us to do this,  to nurture and support the gifted and talented,  wherever in they are in the UK, because the future  of our industry depends on them.

“Now  in its  seventh year,  the Academy has  established itself  as a gold standard  training and development  programme providing a spectacular  springboard to careers in film and  allied industries. This would not be  possible without the backing of the Department  for Education and all our partners, and the many  individuals from the industry who enthusiastically share  their experience and offer guidance to students. We thank  them all for their continuing support and wish all participants  in the BFI Film Academy a happy, creative and successful future career.”

What’s on in Plymouth

BFI Film Academy Plymouth students will be given in crews a short piece written by a local scriptwriter and be tasked with the creation of a short film, working with local actors. Three short films will be produced during the academy by the 20 students involved, and these shorts will be screened not only as part of a final Plymouth-based showcase, but also as part of a regional South West BFI talent event. At every step of the way all students will be given guidance, resources and practical skills training in order to be able to achieve a high quality outcome.

Guest speakers for the coming year include acclaimed cinematographers, producers, directors, camera operators and scriptwriters. All students will have the chance to not only learn from some of the best in the industry, but they will also be actively involved in these workshops. Students will be taught practical filmmaking skills from the ground up, including but not limited to camera, sound, lighting, editing, crew roles, pre and post production and managing actors.

In addition to developing an accomplished array of practical skills, students will also work to individually attain the NCFE Level 2 Preparing to Work in the Film Industry qualification, understand the best progression options for making their career in the film industry, and network with other creative talent from Plymouth and the South West.

A link to the application form can be found on the Plymouth College of Art website here https://www.plymouthart.ac.uk/courses/bfi-film-academy-plymouth/. The deadline for applications is 20 September 2018, spaces are limited to a maximum of 20. For more information, including details on the support that is available to help cover the application fee, contact Billy Abbott on babbott@pca.ac.uk.